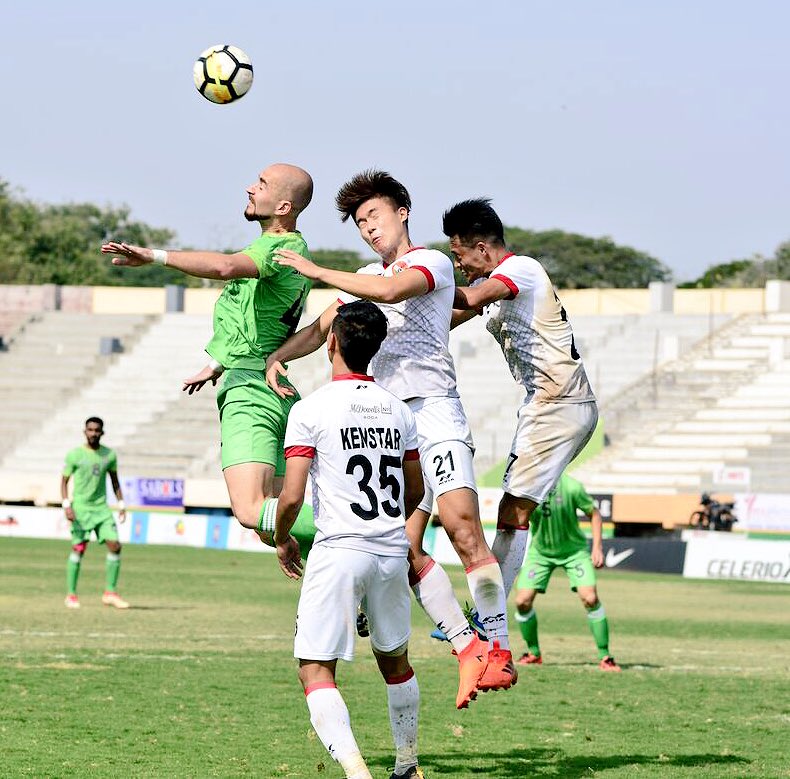 Shillong Lajong held Chennai City to a goalless draw in their I-League match on Sunday.

Both Shillong Lajong and Chennai City created goal-scoring chances but failed to give the finishing touches to end the match in a stalemate at the Jawaharlal Nehru Stadium in Shillong.

Shillong Lajong, after gathering one point from Sunday’s match, remained at fifth spot in the league table with 18 points from 16 matches.

On the other hand, Chennai City is now in the ninth place with 13 points from a total of 15 matches.

Rakic and Micheal Joachim were paired up front with skipper Soosairaj employed on the left.

Aleksander’s perfect through ball split the Lajong defence and Soosairaj latched onto it as he ran into the box.

Meanwhile, Chennai City skipper’s delightful chip over the goalkeeper struck the woodwork of the match.

Koffi found space on the right channel as he surged into the box but the curling effort off his left foot landed straight to Kabir.

Samuel Lalmuanpuia, who is known as set-piece specialist, delivered a delightful free-kick towards the far-post in the 18th minute.

As per reports, Aiman’s header forced Kabir to produce a finger-tip save to keep the scoreline intact. Schumeiko’s poor clearance alerted Saihou at the stroke of half-time. Jagne passed the ball to Koffi who shot at goal but it wasn’t well-timed as the keeper collected easily, say reports.

Pradhan’s long diagonal was stolen off Koffi’s feet by an alert Kabir. The goalkeeper, however, missed the chance to head clear a long ball by Lajong and gifted an opportunity to Jagne who released a shot at an empty goal.

Dharmaraj Ravanan rushed back to clear the ball before it hit the net.

Pradhan pulled off similar heroics when he rushed back to clear a deflected effort from Veniamin Schumeiko off the goal-line, stated in a media report.