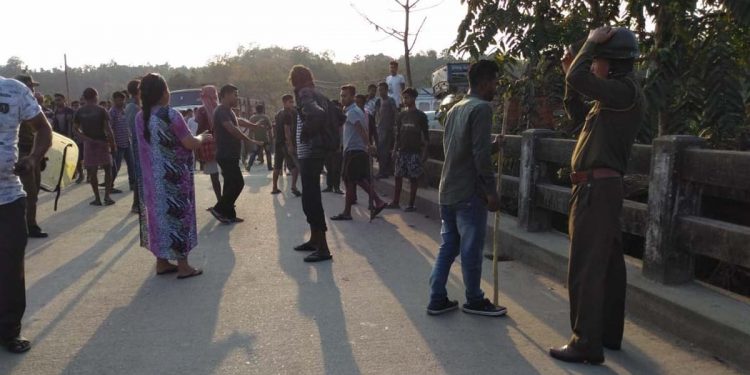 A view of the clash site. Image credit - Northeast Now

Curfew imposed in Shillong and Sohra has been lifted until further orders,  stated a Meghalaya government order on Saturday morning.

“Following the clashes between two groups in Ichanati under Shella Police Station yesterday, curfew was imposed at Sohra sub-division from 10 pm to 1 pm today and in Shillong from 10 pm to 8 am today,” the order read.

“Curfew has been lifted until further orders,” it added.

Based on FIR lodged by KSU, a case has been registered in Shella PS and so far eight persons have been arrested in connection with the incident.

As per government sources, the situation in the state is under control and a close watch is being maintained.

Khasi Students’ Union (KSU) called for a meeting at Ichamati on Friday afternoon to discuss the issue of the Citizenship Amendment Act (CAA) and Inner Line Permit (ILP).

“At around 3 pm, after the meeting, clashes broke out between KSU members and local non-tribals of the area,” sources said.

“The KSU members, thereafter, burnt a haystack at the edge of the market and attempted to burn a house,” sources claimed.

In retaliation, non-tribals pelted stones at a bus carrying KSU members and one local taxi, which had gone to collect the KSU members from the Ichamati market after the clashes, was damaged.

Four KSU members were injured and as a precautionary measure, the East Khasi Hills district magistrate imposed curfew in Shillong and adjoining areas.

Internet/data services were also suspended in the six districts.