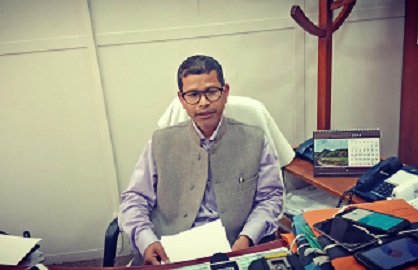 New Meghalaya home (police) minister Lahkmen Rymbui warned that no illegalities would be allowed in the state.

Rymbui also appealed to the people not to spread false news through social media, and work together with the law enforcing agencies without taking law in their own hands.

Minister Rymbui, who holds education, border area development and forest and environment portfolios, has been appointed as the new home (police) minister in place of James K Sangma.

The reshuffle of a few ministers’ portfolios was undertaken by Meghalaya chief minister Conrad K Sangma on Tuesday night.

Rymbui replaced James, who was earlier in the centre of controversy over the inability of the state government to stop illegal transportation of coal.

James remains as a minister and got taxation, while retaining portfolios like power, food and civil supplies, consumer affairs, and law.

“No illegalities would be allowed, and we cannot allow it to grow roots,” Rymbui told reporters on Wednesday, as he assumed charge of the home (police) department.

Asked if home (police) is a burden for him as he also looks after education, Rymbui said any department is a part and parcel of his duty and it is his responsibility to serve the state.

He thanked the chief minister for entrusting him with the responsibility of the home (police) department.

“My priority is to see that peace and tranquility is maintained and the role of police is to ensure law and order, and tackle illegalities. My task is to see that there is confidence among the people,” Rymbui said.

On the law and order situation including the agitation over the demand to implement ILP in the state, Rymbui said he will meet various groups and organizations to discuss with them and work together for the betterment of the state.

A conglomerate of organizations under the banner of Confederation of Meghalaya Social Organizations (CoMSO) decided to implement the ILP on its own as well as assist the state police manning the anti-infiltration gates to check influx at various check points.

“I thanked the people and various organizations as this is the first time that the government and the people are demanding implementation of the ILP,” he said.

“When we have all joined hands on this issue; there should not be any apprehension because we are serious and want to get ILP implemented in the state. I appeal to all that we should work together and no one should take the law in their own hands,” Rymbui added.

The new home (police) minister also said he would hold a review meeting with police to know the strength of the force and how to move forward.

On frequent incidents of attacks by Bangladeshi criminals along the Indo-Bangla border causing fear among the people, Rymbui said there should be close coordination between the state police and the Border Security Force (BSF).

“The incidents in the border were criminal activities and there is no connection with the Citizenship Amendment Act,” the new Meghalaya home (police) minister said.

Appealing to the people of the state to avoid spreading false information through social media, Rymbui said as citizens of the state, all should be ‘responsible citizens’ because spreading of false news will lead to unnecessary problems.