NEEPCO has withdrawn power regulation in Meghalaya; no more load-shedding from March 23

The NEEPCO has withdrawn power regulation in Meghalaya and there will be no more load-shedding in the state from 2 PM on Tuesday (March 23).

This has been confirmed by Meghalaya power minister James PK Sangma.

Informing about the decision of the NEEPCO, power minister James Sangma said this has been possible due to the “concerted efforts” of the power department, the CMD of MeECL and the constant support & guidance of chief minister Conrad Sangma.

The NEEPCO in its letter to the chairman and managing director of Meghalaya Energy Corporation Limited (MeECL) said: “In consideration of your assurances for payment of the balance dues in three equal instalments in April, May and June 2021, the regulation notice issued vide our No. NEEPCO/ED/COMML/R-16/1746 Dated 16.03.2021 is being withdrawn with effect from 14: 00 hrs of 23.03.2021.”

However, NEEPCO said it “will regularly update itself regarding the specific steps taken by MeECL towards lodging of disbursal request with REC/PFC for second tranche of loan including fulfilment of enabling pre-conditionalities for disbursement to avert eleventh hour financial crisis in NEEPCO that may hamper its operations”.

“Further course of action by NEEPCO will be guided by the outcome of such updates,” said the letter issued by N.K. Mao, executive director (Commercial), NEEPCO. 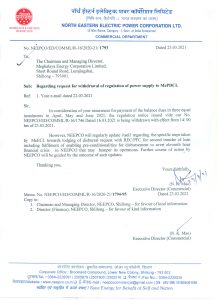 The Meghalaya Power Distribution Corporation Limited (MePDCL) recently decided to resort to load-shedding in the state starting from March 20.

Also read: We are finding ways and means to avoid regulation of power by NEEPCO: Meghalaya power minister

The MePDCL’s move came after NEEPCO decided to regulate the power supply to Meghalaya.

“In view of the power regulation imposed by NEEPCO, the MePDCL is compelled to resort to load shedding with effect from 00:00 Hours of 20th March, 2021,” MePDCL said in a notification.

NEEPCO recently sent a notice to the Meghalaya government, stating that it would regulate power supply from March 20 if Rs 504.41 crore dues are not cleared.

UDP is an ally of the NPP-led Meghalaya Democratic Alliance (MDA) government.