Meanwhile, NCP candidate Krinila N Marak secured 4009 votes, while BJP candidate Santosh R Marak managed to get only 865 votes. Mahamsing M Sangma of the UDP got only 510 votes, Independent candidates Lahatson N Marak, Jan N Arengh and Siljong R Marak secured 506, 321 and 230 votes respectively.  On the other hand, as many as 276 voters voted for NOTA.

The NPP, which is also leading the coalition government in Meghalaya, has outdone itself by overthrowing the Congress in its own bastion, as it had done in the February 27 polls across the Garo Hills region. 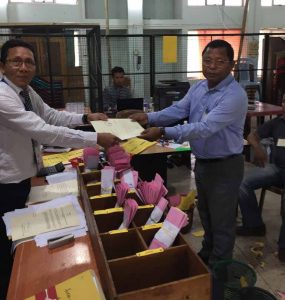 The NPP’s victory came as a blow to the Congress which was hoping to strengthening its position in the Assembly.

The win will further strengthen the position of the NPP which has now increased its strength from 19 to 20 members in the 60-member Assembly.

Voting for the seat took place on April 27 with a total of 78.82 per cent voters turning up to vote. Election in this constituency was deferred following the murder of one of the contestabts, Jonathone N Sangma of the NCP by suspected militants of the Garo National Liberation Army (GNLA) near the village of Sawilgre while he was on his way back from an election campaign.