The Meghalaya government on Saturday decided to make some major relaxations for all the districts in the State amid the COVID-19 lockdown.

It also decided to provide partial relief to Shillong and its adjoining areas after another COVID-19 positive case was reported from the capital on Saturday. 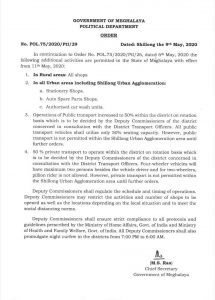 Deputy chief minister Prestone Tynsong informed that the government has now decided to allow all types of shops across all districts, excluding Shillong and its adjoining areas, which are under the green zone from Monday.

As far public transport is concerned, as against the earlier order allowing 25 per cent, it has now been increased to 50 per cent.

Plying of public and private transportation will be done on a rotational basis, for which the deputy commissioners of the respective districts have been entrusted to work out a plan.

Tynsong also informed that starting from Monday, all automobile and stationery shops will be opened in Shillong excluding Iewduh and Police Bazaar, which will continue to remain closed.

The decision was taken at a review meeting held under the chairmanship of the chief minister Conrad K Sangma in Shillong on Saturday.