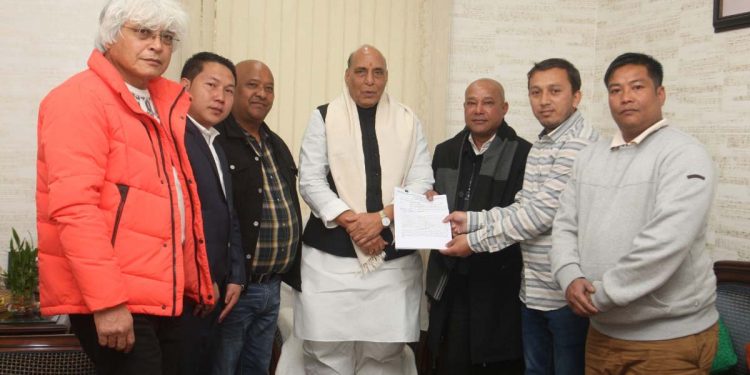 Meghalaya MLA Sanbor Shullai has sought the intervention of union defence minister Rajnath Singh for utilising the Garrison Ground in Shillong by the civilians.

Garrison Ground at Laban is also known as ‘Madan Kirkit’ and the ground is in the possession of the defence authority.

Shullai said the Garrison Ground can be utilised by the civilians by signing an MoU with the defence authority.

During the meeting, the BJP MLA from South Shillong constituency also sought the intervention of defence minister Singh so that Shillong Municipal building byelaws can be extended and made applicable to the Shillong Cantonment area.

Shullai submitted a memorandum to union minister Rajnath Singh in this regard.

He requested Singh for sanctioning of funds required for PHE water tank and upgradation of the Cantonment school up to class 12 besides upgrading and improving the facilities of Goenka Hospital to a 20-bedded hospital.

Shullai also urged the union minister to allow the Shillong Cantonment Board to construct a shopping mall and parking hub as there is a huge section of land lying unutilized in the commercial area of Shillong.

The BJP MLA along with members of the Shillong Cantonment Area Development Committee will also seek the Meghalaya government’s intervention on the need to get the Garrison Ground utilised for public purposes.

They would also seek an extension of the Municipal building byelaws to the whole of Shillong Cantonment area.

The BJP MLA said that earlier, the request for transfer of the Garrison Ground was requested, but nothing concrete has ever materialized.

“The state government can move the central authorities for signing an MoU with the defence authority so that the ground can be utilised by both civilian and defence personnel,” said Shullai.

“The defence authority has no reason to hold the ground as it is centrally located and underutilised. This would be in the best interest of both the civilians and defence authorities,” he added.