The Meghalaya Board of School Education (MBOSE) will declare the results of Class X and Class XII (Arts) examination on May 27.

The announcement came few hours after a website http://files.nvshg.org declared a fake result of the SSLC examination, 2019.

The website declared the SSLC results by copying the results declared by the Board last year.

MBOSE joint director M. Marbañiang said that a complaint would be lodged against unknown people who operated the website with the cyber crime cell of the state police.

The declaration of the fake results has created confusion among the people on Tuesday morning thinking that the Board’s results have been leaked.

The Board, however, said that there was no leakage of the results, but miscreants have declared the fake results.

Candidates can check out their exam result for Class X and XII (Arts) on the official website—www.mbose.in

Candidates can also check their results from the following websites: 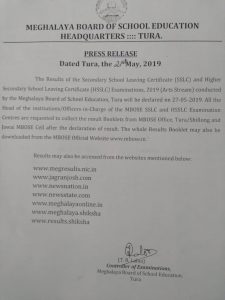 A total of 25,053 candidates had appeared the Class XII (Arts) examination, which began from February 22. There were 101 examination centres across Meghalaya.

The results of Class XII Science and Commerce streams were declared by MBOSE on May 8.

The performance of St. Anthony’s Higher Secondary School, Shillong was the best. Six students of the school found place in the list of Top 10.