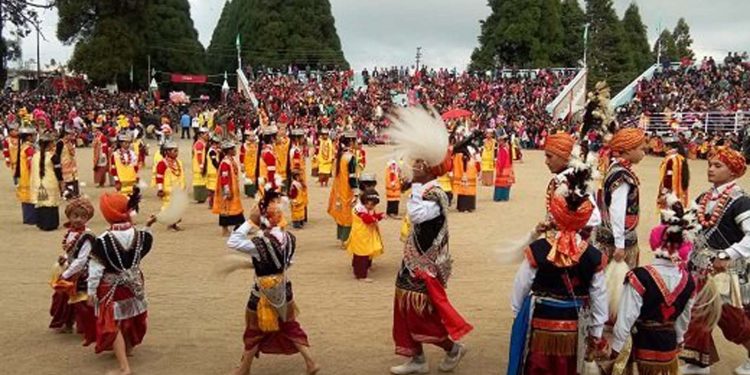 The two-day annual dance began on Wednesday with hundreds of dancers at Smit, on the outskirts of Shillong.

The dance ended with the execution of goats and sacrifice which has been part and parcel of the ceremony, called Pomblang.

Shad Nongkrem is held annually to seek blessings of Almighty and give thanks for showering blessings especially in the field of agriculture and welfare of the people.

Thousands of people from various parts of the state including tourists witnessed the dance on the last day as well as execution of goats by the chief (King) of Khyrim Kingdom at the dancing ground within the premises of the ïngsad (Sacred House).

Meghalaya governor Tathagata Roy and other officials attended the festival.

During the day, dancers both male and female including young boys and girls, dressed in traditional attire danced to the tune of the traditional musical pipe (Tangmuri) and drums (ksing).

The dance came to an end before dusk, after which prayers and sacrifice of goats was conducted.

Several political leaders expressed their wishes to the people on the occasion of Shad Nongkrem.

Meghalaya chief minister Conrad Sangma tweeted: “Wishing the citizens of the State a joyous Shad Nongkrem. May it bring peace, prosperity and harmony in the State.”

“May the state, of which I have beautiful memories from my last visit, continue to prosper & progress,” he added.