Meghalaya govt urged not to relocate Sikh settlers in Shillong

The Shiromani Gurdwara Parbandhak Committee, in a letter dashed off to Meghalaya Deputy Chief Minister Prestone Tynsong, has urged the Meghalaya government not to relocate the Sikh settlers from Bara Bazar (Them ïew Mawlong) in Shillong.

Shiromani Gurdwara Parbandhak Committee (SGPC), which works for the welfare of the Sikh community in the country, in its letter issued on June 12, 2019, stated that the Sikh families, who are residents in the Bara Bazar area of Shillong have been residing there for more than 150 years.

The request from the SGPC came after Meghalaya Deputy CM Tynsong recently said the settlers including the Sikhs living in Them ïew Mawlong must be relocated to solve the issue.

They have been facing a long tussle with the localites for more than 20 years in one way or the other in the name of their removal and relocation from the place.

“It is not out of place to mention that past year riots and untoward incidents took place, for which the Government assured that nothing unlawful or illegal will take place. However, it is again in news and the work in full swing to relocate and remove the Sikh families from Bara Bazaar area is being taking place,” SGPC stated in its letter to Tynsong.

Tynsong on Wednesday said, the ministry of home affairs has summoned the Meghalaya government to discuss the issue.

Saying that the Meghalaya government wants “to remove this problem once and for all, and relocation has to take place,” Tynsong said, “Relocating the settlers does not mean throwing them out”.

Tynsong also said the government is determined to find permanent solution to the long pending issue since settlers in the area are living in a horrible condition as the place is congested and very unhygienic. 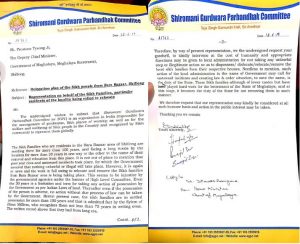 But SGPC stated that the relocation of the Sikh settlers from Bara Bazar would be “injustice by the governmental agencies under the banner of High Level Committee”.

“Even the 30 years is a limitation and term for taking any action of possession by the Government as per Indian Laws of land. Thereafter even if the possession of the person is adverse, no action without due process of law can be taken by the Government,” the SGPC stated.

“Herein present case, the Sikh families are in settled possession for more than 150 years and that is admitted fact by the Syiem of Hima Milliem, who recognises them not less than 75 years in writing even. The written record shows that they hail from long era,” it said.

SGPC, headquartered at Sri Amritsar, urged Meghalaya Deputy CM Tynsong to intervene into the issue on humanity ground and issue appropriate directions to local administration “for not taking any unlawful step or illegitimate action so as to dispossess/ dislocate/relocate/remove the local Sikh families from their respective houses”.

The Shiromani gurdwara committee also mentioned that any action from the local administration to relocate and remove the settlers from Bara Bazar area “may call for untoward incidents” and create “law & order situation”.

“These Sikh families although of lower castes but have played hard work for the betterment of the State of Meghalaya, and at this stage, it becomes the duty of the State for not removing them in such manner,” the Shiromani gurdwara committee representing the Sikh community further stated.