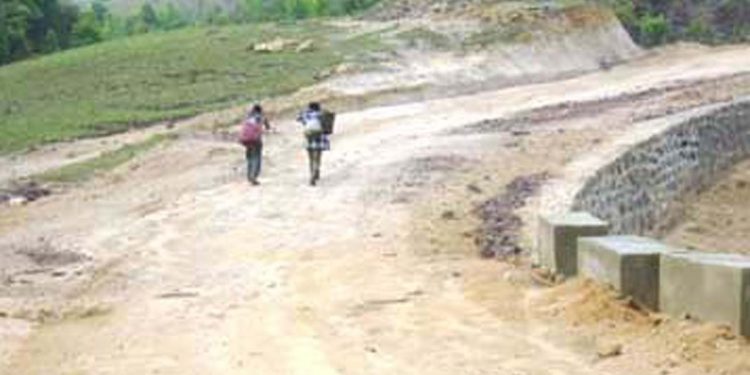 A pro-road project group has welcomed the decision of the Meghalaya government to build a road that will bypass the uranium-rich area in South West Khasi Hills.

The road will be constructed at a cost of over Rs 300 crore.

They alleged that the objective of linking the road up to Mawthabah was to facilitate mining of uranium.

There was a proposal by the Centre through the Uranium Corporation of India Limited (UCIL) to mine uranium from Kylleng-Pyndengsohïong-Mawthabah (KPM) area in South West Khasi Hills district and set up a processing plant at Mawthabah.

At present, the road from Nongstoiñ to Wahkaji is in pathetic condition.

The state government has dropped the proposal to link the road up to Mawthabah and urged the Centre to consider the project only from Nongstoiñ to Wahkaji about 43 km costing more than Rs 300 crore.

The Joint Action Committee on Two-Lane met Meghalaya deputy chief minister Prestone Tynsong and urged the government to speed up the road project from Nongstoiñ to Wahkaji for the benefit of the people.

“We are happy that the government has decided not to include Mawthabah as part of the road project,” JAC secretary Zandy Myrthong said.

According to Myrthong, the question of linking the road to the uranium area is not there anymore because an existing road from Wahkaji to Mawthabah is already owned by the Khasi Hills Autonomous District Council, except few stretches owned by individuals.

“The Meghalaya government and the Khasi Hills Autonomous District Council have already decided not to allow uranium mining in the area and there is no doubt about the proposal to improve the road from Nongstoiñ to Wahkaji,” the JAC leaders said.

The JAC also welcomed the road project even if it is not two-lane from Nongstoiñ to Wahkaji.