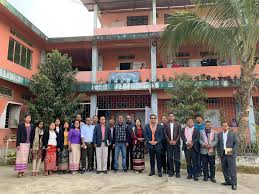 An amount of Rs 12 crore has been sanctioned to the Capt Williamson A Sangma Government College at Baghmara in Meghalaya’s South Garo Hills for development of a new building.

This is expected to give a major boost to the education sector in South Garo Hills district, which has lagged behind with respect to educational infrastructure for decades.

The grant was announced on Thursday by Rongara-Siju MLA Rakkam Sangma, who had earlier met chief minister Conrad K Sangma in this connection.

“This will help boost the education sector in South Garo Hills. It is in line with the chief minister’s vision to make all districts self-sufficient in education,” said Rakkam Sangma.

The South Garo Hills district does not have many educational institutions imparting courses in Science, leading to most students either having to move out of the district or to choose Commerce or Arts to continue further studies.

The current grant is for a new building for the college, which is likely to be received in a few weeks, added Rakkam.