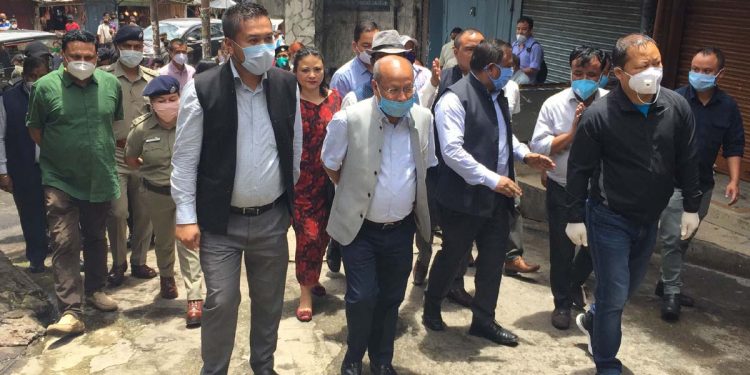 Meghalaya government has decided to allow the re-opening of shops at the biggest market, Ïewduh in Shillong from June 22.

Deputy chief minister Prestone Tynsong told reporters on Tuesday that there are 1,220 shops entitled for re-opening at Ïewduh, and out of 1,220 shops, only 30 to 33 per cent would be allowed to re-open on a rotational basis.

Representatives of the Khasi Hills Autonomous District Council (KHADC), Syiem of Hima Mylliem and Greater Association of Ïewduh Market, were also present during the inspection.

“After inspecting the market area, we discussed and decided that Ïewduh will re-open from June 22,” Tynsong said.

For the past three months, big shops and stalls have been shut down at Ïewduh following the national lockdown imposed to prevent the spread of Coronavirus.

However, most of the wholesale shops were allowed to open on the days permitted by the authority.

“Standard operating procedures (SOPs) and protocols have to be adhered to in totality while re-opening up of shops at Ïewduh,” Tynsong said.

The areas which are not allowed for re-opening at Ïewduh include fish market, meat market, bookstalls, stalls selling betel nut and betel leaf, vegetable markets, and hawkers as selling of these products have already taken place in other places.

“We are finding out ways and means for hawkers too, and the deputy commissioner will work out the modalities,” he said.

Tynsong informed that weekly markets throughout the state would also re-open from June 29, and all the DCs would consult with the stakeholders as far as re-opening up of these markets and work out the required modalities.

Tynsong, however, said border haats along the international borders and inter-state weekly markets would not be allowed to re-open.