A delegation of Meghalaya govt will visit New Delhi to hand over the resolution adopted by the Assembly to Amit Shah after New Year: Prestone Tynsong 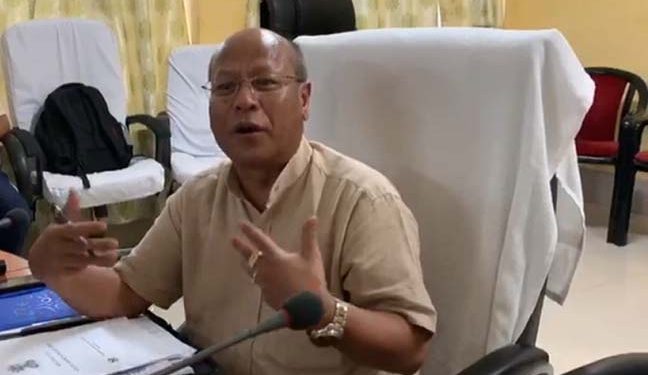 A delegation of the Meghalaya government is unlikely to visit New Delhi after Christmas to meet Union home minister Amit Shah to hand over the resolution on ILP.

The resolution on the Inner Line Permit (ILP) was passed by the Meghalaya Assembly on December 19.

“The next step after passing the ILP resolution is, the Speaker will prepare the proceedings and forward a copy of it to the state government and at the same time to the ministry of home affairs,” deputy chief minister Prestone Tynsong said on Monday.

Whether the government delegation would visit New Delhi immediately after Christmas, Tynsong said, “Now, everybody is busy during this festive season from December 24 to January 2 next year.”

After New Year, Tynsong said, a delegation of the Meghalaya government will visit New Delhi to personally hand over the resolution adopted by the Meghalaya Legislative Assembly to Amit Shah.

“He (Shah) has assured that we should celebrate Christmas and New Year well and then come back and meet him. So, we will go along with the resolution adopted by the House.”

“Though the resolution has already been submitted to the MHA, personally the delegation to be led by the chief minister will go to Delhi,” Tynsong said.

When asked about the ILP and an Ordinance that seeks to register people from outside who visit the state, Tynsong said once ILP is given to Meghalaya, the state government would abandon the Ordinance.

The Ordinance was brought in to amend the Meghalaya Residents Safety and Security Act, 2016 in order to monitor the entry of people into the state by asking them to register with the government.

The Ordinance is yet to be approved by the Meghalaya governor.

The MRSSA, 2016 talks about setting up entry/exit points in different parts of the state to check influx.

When asked how the genuine permanent citizens of Meghalaya – both tribals and non-tribals – would be identified if ILP is approved by the Centre, Tynsong said, “Non-tribals, who are genuine residents of the state, have the permanent residence certificate (PRC).”

He also informed that whether ILP or Ordinance, the state government would frame the rules to ensure smooth registration of people who visit the state.