Meghalaya’s Dippu Sangma scripted history on Sunday by becoming the first native cricketer from the State to have scored a century in a Ranji Trophy match. 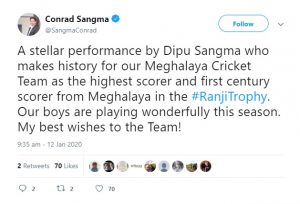 Meghalaya chief minister Conrad Sangma on Tuesday congratulated Dippu for his ‘stellar performance’ and praised the rest of the team for giving their best shots in the Ranji Trophy 2019-20 season.

‘A stellar performance by Dipu Sangma who makes history for our Meghalaya Cricket Team as the highest scorer and first century scorer from Meghalaya in the #RanjiTrophy. Our boys are playing wonderfully this season. My best wishes to the Team!’

However, guest professionals Dwaraka Ravi Teja and Sanjay Yadav with their respective scores of 107 and 119 on Sunday put the Meghalaya cricket team in a good position on the first day.