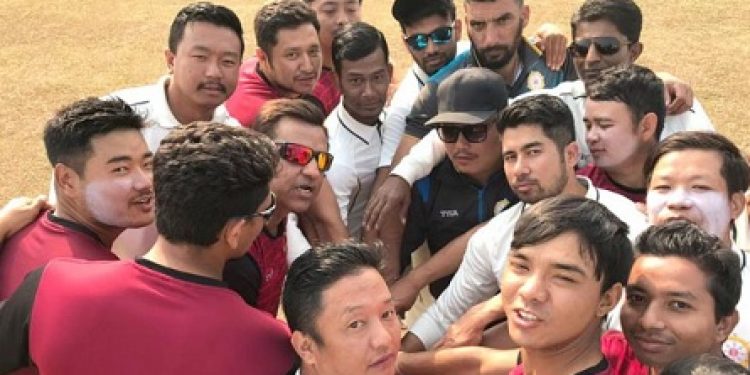 The jubilant Sikkim team after defeating Arunachal Pradesh by 10 wickets in a Plate Division encounter at Golpara in Assam on January 10, 2019

Sikkim cricket would be more than happy by concluding their maiden Ranji Trophy campaign on a winning note.

Sikkim defeated Arunachal Pradesh by 10 wickets in a Plate Division encounter at Golpara in Assam on Thursday, reports Sikkim Express.

Sikkim closed their first innings with 262 on the board taking a lead of 93 runs.

With 16 runs needed for win, Milind smashed four boundaries in the Sikkim innings of nine balls to win the match and the wrap up the season on day-3 of the four-day match.

Ishwar Chaudhary, for his 10-wicket haul in the match, was adjudged Man of the Match.

Notably, Chaudhary, the leading bowler of Sikkim team, took 51 wickets and is at third position of most wickets taken by the bowlers of this season of Ranji Trophy.

He grabbed five 5-wicket hauls and took 10 wickets in a match twice.

The batting department was led by Milind Kumar who is at number two on the all-time list of batsmen with most runs in a Ranji Trophy season.

With 1,331 runs in eight matches this season, he is the top scorer of this season so far. Second-placed Punit Bisht of Meghalaya is 432 runs behind.

Milind scored six centuries and also held a record for most fours in a season.