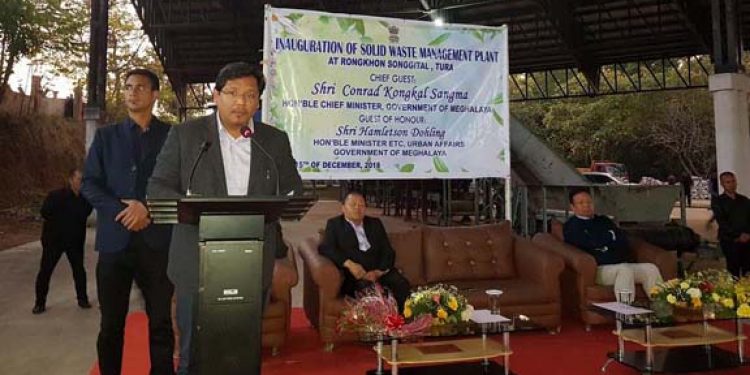 Speaking on the occasion, Chief Minister Conrad Sangma urged the people of the area to own responsibility for segregation of waste.

The CM also tweeted: “It is a beginning to make Tura town cleaner.”

It may be mentioned that the CAG reported that out of the 11 towns in Meghalaya, SWMP has been undertaken only in Tura, Nongpoh and Shillong. While SWMP in Shillong has been implemented by the municipal board, in Tura and Nongpoh, the projects are being implemented by the Meghalaya Urban Development Authority (MUDA).

It was also mentioned in the CAG report that till July 2015, design, fabricating, erection and commissioning of solid waste compost plants in Tura and Nongpoh was not undertaken causing unfruitful expenditure of Rs 10.24 crore.

As per the CG report in Tura, construction of solid waste disposal facility and external electrification was awarded to Roosevelt P Marak, Williamnagar, on February 28, 2011 at a cost of Rs 3.65 crore and it was to be completed by November, 2011.

The Government received flak due to delay in completion of the waste management plant in Tura.

However, the people of Tura have finally heaved a sigh of relief after the inauguration of the plant.

Inaugurated the solid waste management plant in #Tura. I urge people to own responsibility for segregation of waste.
It is a beginning to make Tura town cleaner.@PMOIndia @SwachhBharatGov @HardeepSPuri pic.twitter.com/j5Qnh1Y07Y