Coal India Limited brings eight pumps to the site for pumping out the water from the coal mine. 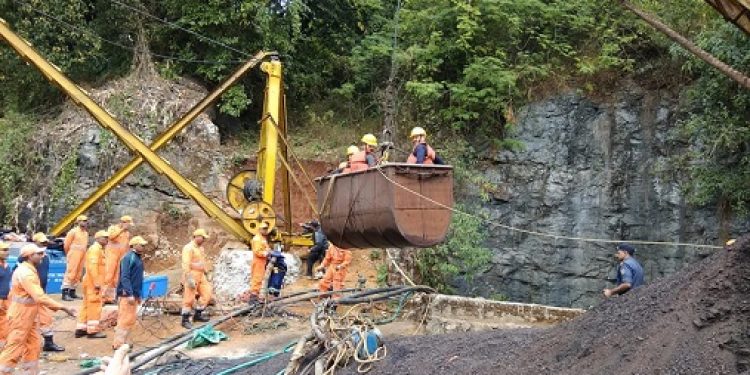 File photo of rescue operation at the coal mine site in East Jaintia Hills district of Meghalaya. UB Photos

Nine divers of the Indian Navy reached the site of the coal mine in East Jaiñtia Hills district where 15 miners have been trapped, while 10 high-powered pumps for pumping out water from the mine were transported to the site at Khloo Ryngksan near Leteiñ river on Saturday.

A team of surveyors of the Coal India Limited (CIL) has also reached the site and started surveying the coal mine and areas around it in order to know whether the water from the nearby river has entered the mine or whether the water has come from other inter-connected coal mines.

The high-powered pumps reached the site along with 21 men from the Odisha fire service department to assist the National Disaster Response Force (NDRF) in the rescue operation.

“The ten high powered pumps were transported by trucks from Khliehriat to the coal mine site,” Syiemlieh informed.

He also said that pumps were being installed at the coal mine site for pumping out the water.

The NDRF has 71 personnel who have been camping at the coal mine site along with the State Disaster Response Force (SDRF) personnel and police after the incident occurred on December 13.

East Jaiñtia Hills Additional Deputy Commissioner, S. Syiemlieh that equipment meant for the nine divers of the Indian Navy from Vishakhapatnam, would be taken to the site on Sunday.

Syiemlieh said that a team leader of the divers of the Indian was also briefed about the operation by the NDRF Assistant Commandant, Santosh Kumar Singh at the site.

Experts from the CIL were surveying the coal mine as well as the Leteiñ river which is flowing near the coal mine.

The operation was suspended on December 22 after the pumps used for pumping out the water could not reduce the level of water inside the coal mine.

Around 20 lakh litres was pumped out from December 14 to December 24.