MeECL employees threaten to stage protest over discontinuation of pension, other issues; write to Meghalaya CM

The Coordination of Committee of Registered MeECL (Employees) Associations and Union (CCORMAU) on Wednesday wrote a letter to Meghalaya chief minister Conrad K Sangma demanding scrapping of the decision to discontinue pension to retired employees.

CCORMAU in its letter on Wednesday raised several issues and demanded that all their concerns be addressed by the state government within June 15, 2021 and threatened to stage protest if the government fails to address their issues.

Opposing the proposal to hand over 56 substations, the employees’ body in its letter to the Meghalaya CM said: “The CCORMAU would like to place before your kind self the fact that the maintenance cost will be much less if operated and run by the MeECL itself.”

“The decision to offer an outside party to handle the affairs of running the substations of MeECL, is a step towards privatisation and such policies have cut down the hopes of unemployed and trained/skilled youths of the state in getting their service regularised in the future.”

The employees’ organisation has also urged the Meghalaya chief minister to stop invitation of tender for operation and maintenance of power station.

The organisation said “these can be better maintained by own employees of MeECL”.

On the distribution franchisee (DF) to RECPDCL, the organisation said: “With great regret, the employees of MeECL have seen recent correspondence between MeECL management and the state government whereby some parts of MePDCL are to be handed over to and outside party in the form of distribution franchise. The employees strongly protest such a move which is unwanted and unnecessary and will only serve to weaken the MeECL further.” 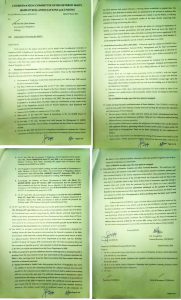 The CCORMAU has urged the Meghalaya government to scrap these plans.

“It is patently unfair to deny them of their means of sustenance, especially during a sensitive time such as this when the pandemic has put the retirees in a very vulnerable position,” it said.

The organisation demanded permanent solution to the question of terminal benefits to the employees as per MoU signed between the state government, the MeECL and its employees in 2020. “Also, that payments to retirees pending since last three years should be released immediately,” it said.

The organisation strongly demanded to scrap the plan of handing over of distribution franchisees, sub-stations, maintenance of power stations to outside party and termed the plan as “detrimental to the MeECL and the state in general”.

“The CCORMAU urges the state government to address these concerns within 15th of June 2021, failing which the employees may be forced to take extreme measures to protest for their livelihoods and the future of their families,” the letter said.