MeECL casual workers to rekindle amber of agitation from April 12 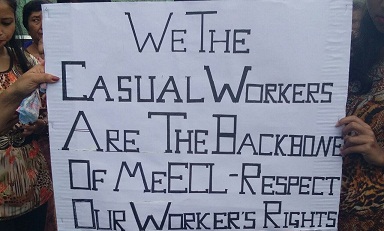 Casual workers of the Meghalaya Energy Corporation Limited (MeECL) under the banner, MeECL Progressive Workers Union (MPWU) will begin their agitation from April 12 alleging stubborn attitude of the management to restart the negotiation process on their various demands put forth by the Union.

The demands include regularization, equal pay for equal work, and entitlements such as PF, gratuity, leave, maternity leave, ESI among others.

According to the MPWU, following talks held in December, the management of the Corporation had agreed to release wage arrears and to begin making payments as per latest wage rates.

“The management had officially committed that post Assembly elections, negotiations will again begin between the Union and them. Yet despite many reminders, the management remains silent, forcing the workers to resort to agitation that may include cease work,” the Union threatened in a statement issued on Monday.