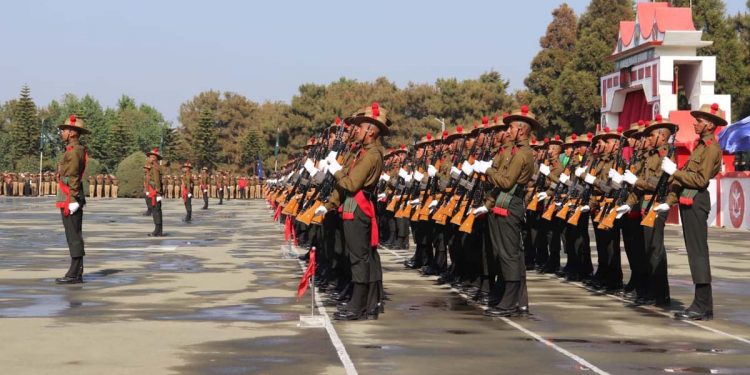 A view of the passing-out parade of 58 Gorkha Training Centre at Happy Valley in Shillong.

A total of 248 Indian Army recruits took ‘oath of affirmation’ on Saturday during the passing-out parade of 58 Gorkha Training Centre at Happy Valley in Shillong.

The passing out parade marks the culmination of rigorous recruit training and completes the transformation of a determined recruit into a young soldier of the Indian Army.

“In an impressive ceremony marked by immaculate turnout and precision marching, a total of 248 recruits took oath of affirmation,” said a defence statement.

The passed-out young soldiers will now be dispatched to the numerous locations of Indian Army which is dedicated to protect the country whenever the need arises.

“The parade was reviewed by Brigadier M Narendranath Sajan, Commandant 58 Gorkha Training Centre wherein he exhorted the young soldiers to strive to be the finest of Indian Army and congratulated them on this important juncture of their life,” the statement said.

During his address, the Commandant stressed upon the importance of valour, honour, ethos and fine traditions of Indian Army, it added.

He also complemented the staff for having conducted the training following COVID19 protocols and using innovative methods which will help the young soldiers in serving the country in more efficient way.

In the presentation ceremony, recruit Abhishek Sakia was declared the overall best recruit of 8 GR and recruit Manish Ale Magar was honoured with the best recruit of 5 GR (FF) award.