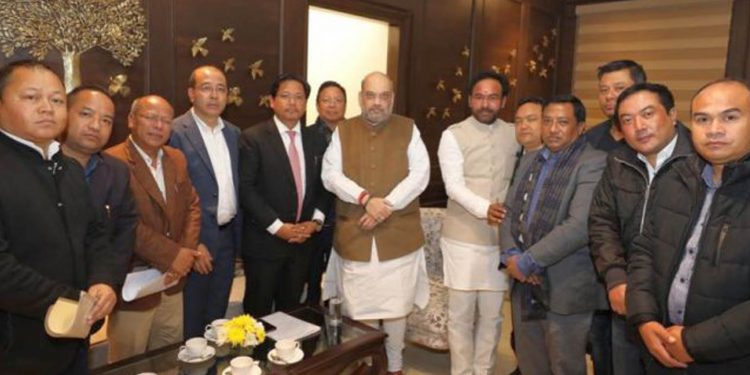 Home Minister Amit Shah in a meeting with a delegation of Meghalaya. File Image

No date has been fixed yet for the meeting between a Meghalaya government delegation and union home minister Amit Shah regarding the implementation of ILP in the state.

The delegation is slated to hand over a resolution passed by the state Assembly urging the Centre for quick implementation of ILP in the state.

The resolution was passed by the state Assembly a fortnight ago.

Before Christmas, Meghalaya deputy chief minister Prestone Tynsong said that the government delegation would visit New Delhi after the New Year to meet Amit Shah and hand over him the resolution on inner line permit (ILP).

Meghalaya health minister AL Hek on Friday said, “A decision in this regard would be taken only after CM Conrad Sangma returns from abroad.”

Earlier, Hek had made a comment that getting ILP for Meghalaya may not be as easy.

When asked if the Centre would give ILP to Meghalaya as it has to Manipur, Hek said, “We do not know yet. But there must be something in the Centre’s mind.”

Hek, who is also the BJP legislator and part of the MDA government, said the Centre may also take views of different stakeholders including the state government before taking any decision on ILP.

“The Centre may go into the technicalities and legalities of the issue,” he said.