A view of the Headquarters of Meghalaya Police, Shillong. Image - megpolice.gov.in

The name and logo of Meghalaya Police have been used by some miscreants to spread fake news on social media.

According to Meghalaya police, the miscreants using its name and logo shared a fake statement on Facebook which read as: “We will arrest to all who oppose the CAA and Demand ILP, because the problem come from those people. We are here to bring peace in the State.” 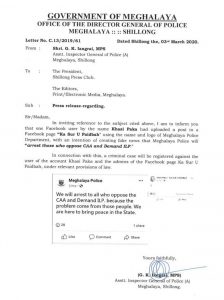 Police said one Facebook user by the name ‘Khasi Paka’ had uploaded the fake statement on the Facebook page named as ‘Ka Sur U Paidbah’ using the name and logo of Meghalaya Police department with an intention of creating fake news that Meghalaya Police will “arrest those who oppose CAA and Demand ILP”.

“In connection with this, a criminal case will be registered against the user of the account ‘Khasi Paka’ and the admins of the Facebook page ‘Ka Sur U Paidbah’ under the relevant provisions of law,” assistant inspector general, G K Iangrai said.

This has come to light at a time when incidents of violence were reported from various parts of Shillong and Sohra in East Khasi Hills.

The law and order situation in East Khasi district deteriorated after the killing of a Khasi Students’ Union (KSU) activist at Ichamati village by non-tribals following differences came up during a KSU meeting on the CAA and ILP organised at the village on Friday.

On Saturday, miscreants stabbed several non-indigenous people in Shillong leading to the death of a small trader from Assam.