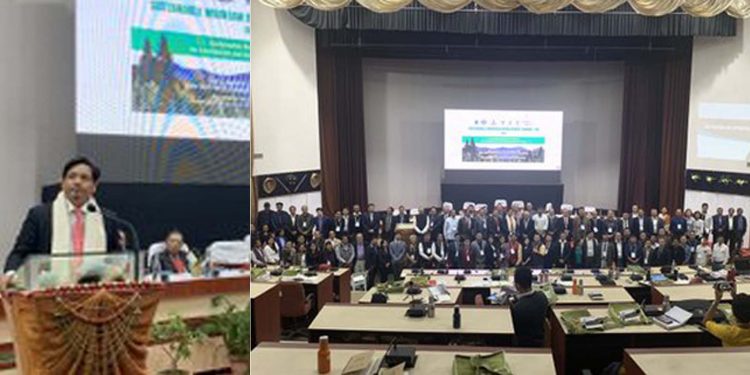 Meghalaya chief minister Conrad K Sangma on Monday said there have been enough talks and now time has come to act.

The Meghalaya CM said this after inaugurating the eighth edition of the Sustainable Mountain Development Summit (SMDS-VIII) of the Integrated Mountain Institution at NEC auditorium in Shillong.

“We need to find ways to convert all our discussions and policies into actions and solutions,” added the CM.

He sought better collaboration among entrepreneurs to build an ecosystem that can help create economic opportunities for all in the Himalayan region.

Conrad Sangma, who was present as chief guest, released a new IMI document, “Assessing the Changing Entrepreneurship Landscape in the Indian Himalayan Region”.

The document was prepared in collaboration with the Indian Institute of Management, Shillong.

While speaking on the occasion, Conrad shared his government’s vision for Meghalaya.

The CM said there were huge gaps between theories and practices, and the linkages between the policies and action at the grassroots can only be bridged through entrepreneurship.

Sangma said the summit theme was most timely as he felt promoting entrepreneurship was the key to link government policies with the grassroots to create the economy of the future, which is resilient as well as sustainable.

He highlighted the urgency to build up the potential of the youth to face the future which is likely to be disrupted by climate change and emerging technologies, particularly Artificial Intelligence (AI).

“We need to prepare ourselves, particularly the youth for this so that they would be able to cope with disruptions and find ways to build a resilient, green economy,” he added.

Citing the recent assessment report on the Hindukush Himalayan region, Sharma pointed out that a large section of upland population is haunted by growing poverty, food insecurity and lack of access to electricity amongst other challenges confronting the region.

Unless the challenges of climate change are not resolutely addressed, in the next decade, one-third of glaciers and two-third of endemic species of the Himalayan region could be lost.

“We need cooperation at all levels to bring resilient solutions to the voiceless masses at the grassroots,” he said.

“Conservation of water and biodiversity are critical to the sustenance of economy and ecosystem services of the entire Hindukush Himalayan region,” Sharma added.

If “Amazon is the lungs of the earth, Hindu-Kush Himalayan region is the pulse of the planet,” Sharma said and called for collective action to work on the priorities of the mountain region.

In his inaugural address, IMI president Sushil Ramola provided a brief history of IMI and its evolving collaborative platform for the multiple stakeholders of the Himalayan region through Sustainable Mountain Development Summits.

“We are working towards creating an entrepreneurship ecosystem that can integrate all the components – policies, funding, market access and capacity building for the youth,” said Ramola.