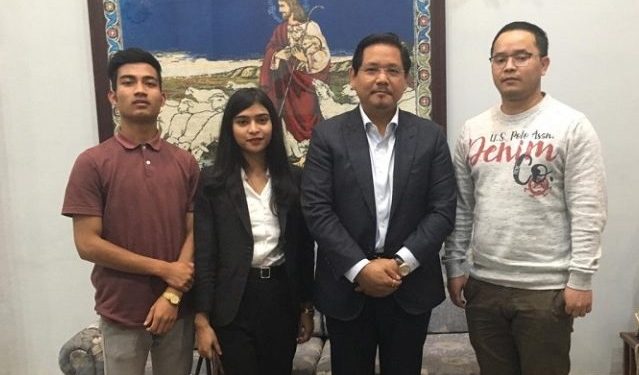 The Khasi Students’ Union (KSU) has urged the Meghalaya government to take measures to curb trafficking of young and minor girls from the State.

The request was made by a delegation of KSU Delhi unit led by its president Marbiang Khongwir before the chief minister Conrad K Sangma during a meeting held in national capital, following a recent trafficking incident.

A statement issued on Thursday informed that the Delhi unit has sought the intervention of the chief minister on the need for the government to take long term measures to curb the trafficking of young and minor girls from the State.

Stating that the divorce rate in the State is increasing at an alarming pace and is one factor that contributes to such cases, the union also urged the chief minister for speedy implementation of the Marriage Act that has been initiated by the Maitshaphrang Movement convener, Micheal Syiem and also to reach out to the unorganized sector and vulnerable sections, it said.

It also added that to increase the women workforce into the formal sector was also another proposal made by the union.

“The chief minister has expressed concerned regarding this issue and assured the Union that women empowerment and its issues will be giving more importance in the next budget session,” the statement further informed.

Regarding NEIGRIHMS issue, the Union has also reminded the chief minister on the previous demand by the KSU central body in appointment of the official director of NEIGRIHMS.

“The Chief Minister has responded positively and the work is at an advance stage and in no time, this will be successful,” the statement said.

The Union also extended support to the chief minister and his team for their meeting with the union home minister Amit Shah to discuss on the resolution to implement the Inner Line Permit in the State.