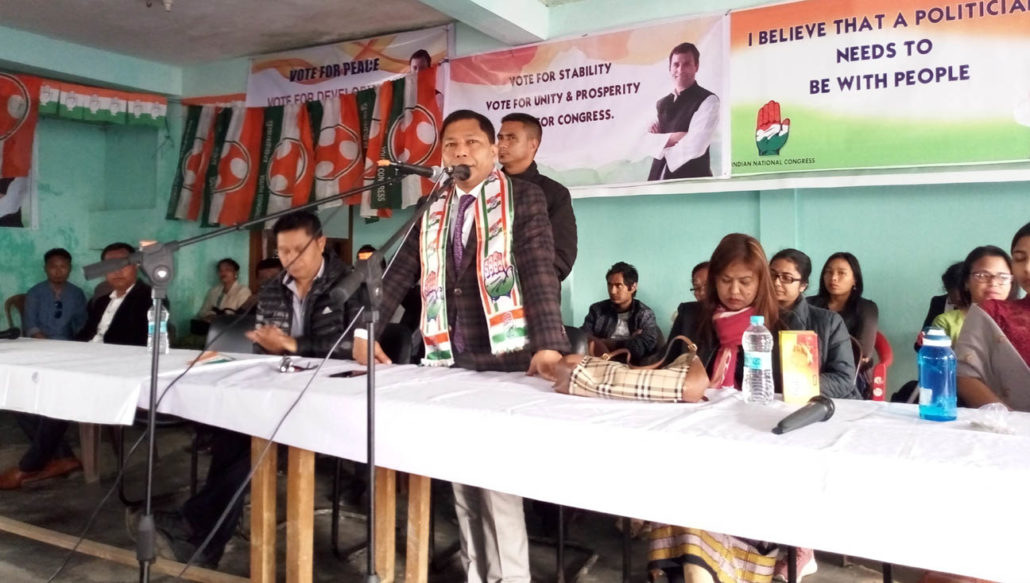 Meghalaya Chief Minister Mukul Sangma on said Wednesday reiterated that the Congress would win the Meghalaya Assembly polls with an absolute majority.

“Congress will be able to get absolute majority with 40 seats in the coming elections,” said Chief Minister Mukul Sangma while addressing Congress party functionaries at the Congress Bhavan in Williamnagar on Wednesday.

Sangma filed his nomination papers at Williamnagar in East Garo Hills for his second seat – Songsak.

In Songsak, Mukul will take on NPP strongman Nihim D Shira, a two-time MLA from Songsak Assembly constituency and a key leader of the National People’s Party (NPP).

“There was speculation as to whether I would file my nomination or not and that has ended with filing of the papers. I have come to work for the people of Songsak,” the CM announced.

Congress leader Deborah Marak, who is fighting from Williamnagar constituency to get re-elected for the fourth term, was also present at the party office.

He said, “If we could achieve so much while I was sleeping, think of what we can achieve when I am awake.”

Pointing out that there has been development of roads across the State, Mukul said, “Earlier it would take about 6 hours to reach Shillong through Guwahati. Now, it takes only two-and-half hours.”

He added, “From Tura to the airport, its takes about 2 hours 45 minutes and Tura to Williamnagar, only about 1 hour 30 minutes. We have been able to develop this infrastructure over the past 8 years of Congress rule.”

Lambasting the BJP-NPP alliance, Mukul urged the voters to cast their votes in favour of the Congress to protect their own interests.

“We have initiated development over the past eight years and that development needs to continue and as such the Congress government needs the mandate to continue this effort,” Mukul told the voters adding, “There are many places, which still need development, including South Garo Hills, Dadenggre and the likes and our government wants to assure you that it will happen. If we fail, you can throw us out.”