The Meghalaya environment minister is likely to visit the site by the end of February. 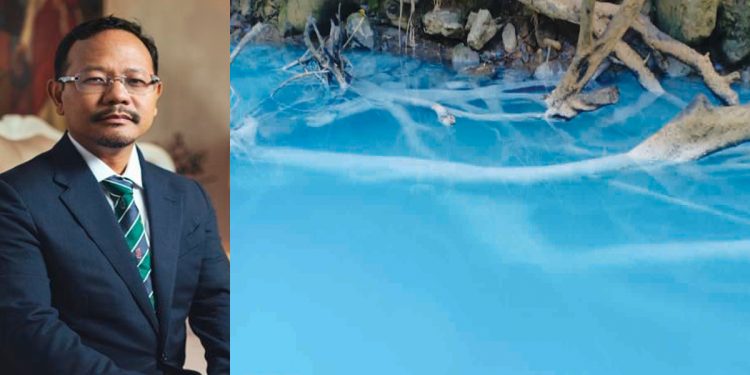 Meghalaya Environment and Forest Minister James K Sangma has expressed serious concern on river Lukha turning ‘deep blue’, and said he would go for an ‘on-the-spot’ inspection of the polluted river in East Jaintia hills district.

Without a definite answer to what actually turns the water of river Lukha ‘deep blue’, Sangma will now try to unearth the cause himself.

“It is a serious issue, and I am looking forward to visit the place and discuss with the officers on site to see how we can address this issue and rejuvenate the river,” Sangma said.

The Meghalaya environment minister is likely to visit the site by the end of February.

Water of river Lukha has been turning blue during the winters since 2007. But, this year, the water quality has apparently turned toxic, and has turned ‘deep blue’.

Thousands of fishes and other aquatic flora and fauna have reportedly been killed because of the high-level of contamination in the river system.

Local tribal villagers in Narpuh elaka in East Jaintia hills district have been turning ‘deep blue’ due to the release of untreated effluents by cement factories at Thangskai and Lumshnong areas.

Topcem Cement and Star Cement are the two largest producers of cement in the area, and its being suspected that both the cement factories may have played some role in polluting the river system.

While the cement companies have always been claiming that they were not responsible for changing colour of Lukha River, according to experts, Calcium Carbonate slush from limestone mines can change colour of river waters to ‘blue’.

On January 26, members of the Meghalaya Assembly Committee on Environment had inspected the water quality of river Lukha, and had called for an in-depth study to ascertain the cause of the river water turning ‘deep blue’.

The Committee also inspected the downstream of the Lukha River and the confluence of Lukha and Lunar River.

Himalaya Shangpliang, MLA of Mawsynram, and a member of the the Meghalaya Assembly Committee on Environment, said the MSPCB and CPCB to prepare a detailed report so that it can be tabled in the House.

Earlier, the Khasi Students Union (KSU) on December 21 had set a deadline of three weeks to Meghalaya Government to find out the ‘actual cause’ of the ‘mysterious blue’ colour of river Lukha in East Jaintia Hills district.

A delegation of the Narpuh unit of the KSU had met E Kharmalki, deputy commissioner of East Jaintia Hills district, and submitted a memorandum demanding an ‘independent inquiry’ into the issue.