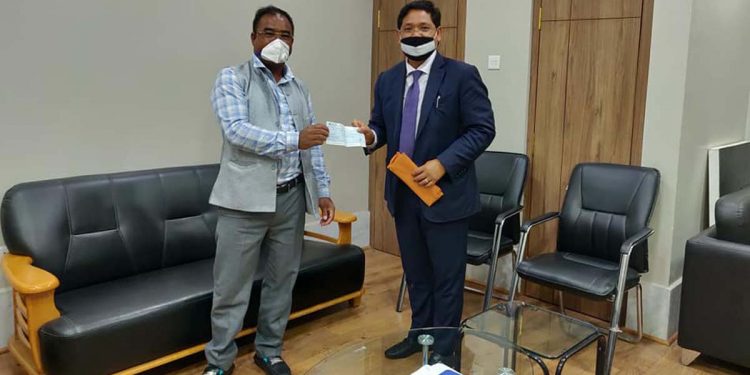 Nidamon Chulet, the prime accused in the assault case involving Agnes Kharshiing and Amita Sangma, on Friday handed over a cheque of Rs 2 lakhs to the Chief Minister’s Relief Fund to fight COVID19 pandemic.

The CM had thanked the coal baron, and the CMO Meghalaya Facebook Page said, “Thank you Mr. Nidamon Chulet for donating Rs 2,00,000.”

On November 8, 2018, Kharshiing, Sangma and their driver E. Kurbah were attacked by a group of 40 people – allegedly led by Chullet – in the East Jaintia Hills district of Meghalaya.

As per reports, Kharshiing and Sangma had complained to the local police about ‘illegal’ mining and transportation of coal from the area amid a mining ban by the NGT.

Both Kharshiing and Sangma are part of the well-known NGO, Civil Society Women’s Organisation.

After being in hiding for nearly a month-and-a-half, Nidamon Chullet, who is also a senior leader of the ruling NPP, had surrendered on December 25, 2018.

Agnes Kharshiing on Saturday told Northeast Now that the Meghalaya government should not have allowed Nidamon Chulet to ‘personally hand over the cheque to the CM of Meghalaya.’

“It just shows that those who are involved in violence against women are getting a platform when they are in a political party,” she said.

Kharshiing said, “We literally died. And I remember and I know he (Nidamon Chulet) was there.”

“We have no problem in the (Nidamon Chulet) giving the money. But, the government should not have given him such a platform,” she said.

People will realise that when someone is in a political party, all the rules will be twisted to protect the perpetrators, Kharshiing said.

She expressed her unhappiness that the Meghalaya CM’s office has given so much ‘political mileage’ to Nidamon Chulet for allowing him to meet Conrad K. Sangma to hand over the cheque.

Kharshiing is also not happy with the slow progress with the ‘assault’ case.

“I had recently contacted the public prosecutor of East Jaintia hills to enquire about the progress of the case,” she said, adding that a fresh summon has now been sent to her.

Kharshiing said prime accused like Chullet will continue to move around freely with the patronage of the political parties.

Chullet is a senior leader of the ruling NPP in East Jaintia Hills districts, and also the president of the Jaintia Hills Truck Owners and Drivers Association.