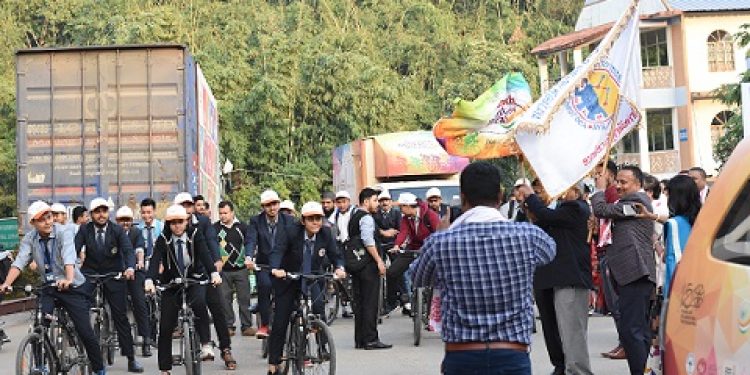 A team of 70 cyclists who are a part of the Government of India’s ‘Swasth Bharat Yatra‘ campaign, rallied at the University of Science & Technology, Meghalaya (USTM) Campus on Thursday and addressed and interacted with hundreds of youths.

On the occasion, Prabhat Kumar Mishra, Assistant Director (Regulatory Compliance), FSSAI, delivered a talk on ‘Food Safety and Management’ in presence of high officials of the Govt of Meghalaya, high officials of USTM and esteemed participants of the rally.

The talk was organized by the Department of Business Administration and Department of Food Science and Technology, USTM. Oath for eating healthy and safe was taken by all the participants present, stated an USTM press communique.

After the talk, certificates were distributed to the women entrepreneurs of rural areas of Meghalaya for their participation in the workshop conducted by Department of Food Science and Technology on the occasion of World Food Day. SN Sangma, Jt Commissioner, Food Safety, Meghalaya also spoke on the occasion.

UDTM Chancellor M Hoque extended warm welcome to all the participants of the rally. Faculties, students, officials and other staff members of USTM offered a warm welcome to the cyclists who have cycled from Shillong. A considerable number of students accompanied the rally till Khanapara while they left for their next destination. During the interaction, Dr PK Goswami, Vice Chancellor, USTM emphasized the importance of nutrition and eating right food for the young generation, it added.

The Government of India launched a national campaign ‘Swasth Bharat Yatra’ on the World Food Day under which a pan-India cyclothon has been organised to sensitise people about eating safe food and be healthy.

The Food Safety and Standards Authority of India (FSSAI) is leading this campaign where numerous cyclists are participating in over 18,000 km relay cycle rally travelling across six tracks through almost every state and UT over 100 days to propagate a powerful message ‘Eat Right India’.

The objective of the campaign is to create consumer awareness about eating safe and nutritious food for becoming healthy.