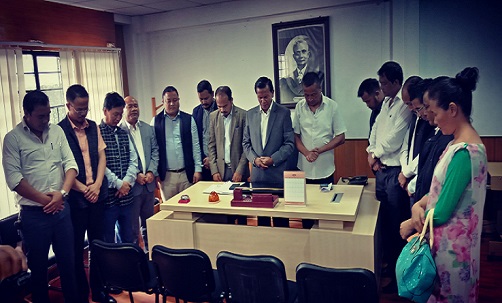 Shylla and other members pray in CEM chamber after his election on July 13, 2018. Photo: Northeast Now

The ??Khasi Hills Autonomous District Council in Meghalaya got Hispreaching Son Shylla as the new chief executive member (CEM) on Friday, but his election has been challenged in the Meghalaya High Court by members supporting the candidature of Council member, Grace Mary Kharpuri.

The election to the post of CEM was to be held on Thursday at 2 pm, but after Chairman of the council L G Nongsiej resigned from the post few hours before the election, the Governor fixed the election on Friday at 11 am.

The Governor also appointed former chairperson of the Council Teilinia Thangkhiew as Pro tem chairperson where she presided over the proceedings in the House including the election.

As Kharpuri did not come to the Council to face the election, the Pro tem chairperson announced from the chair the election of Shylla as CEM without facing the opponent.

Shylla, who was supported by members of the coalition, Khasi Hills Democratic Alliance (KHDA), thanked all the members on his election to the CEM post, and assured of working together with all the members in streamlining the functioning of the Council.

However the opposition members under the coalition, People’s Democratic Alliance filed a petition in the Meghalaya High Court challenging the validity of Shylla’s election.

The petition was filed in the name of People’s Democratic Front leader, James Ban Basaiawmoit, against the Meghalaya government, KHADC and the Pro tem chairperson of the Council.

Kharpuri told reporters that despite being the candidate for the CEM election, she decided not to face the election to the CEM post on three grounds.

According to Kharpuri, the court has taken up the petition, and asked the Meghalaya government, KHADC and Pro tem chairperson to reply within one week.

The candidature of Kharpuri was being supported by members of the coalition, People’s Democratic Allliance, including Congress members.