More than a hundred dumpers remain stranded at Paikan-Krishnai; West Gao Hills police allegedly have assaulted some drivers, handymen of dumpers from Bhutan 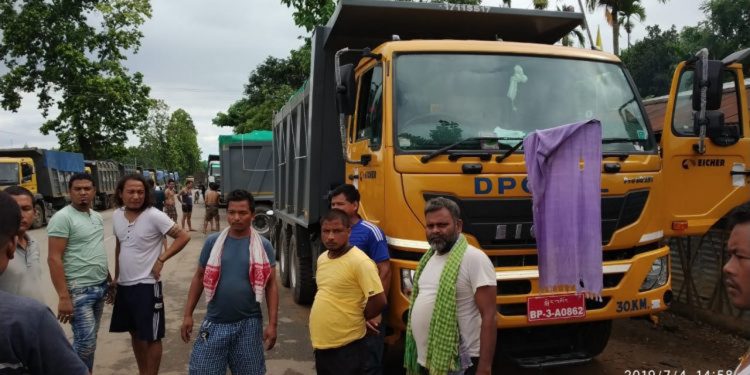 More than a hundred loaded dumpers coming from Bhutan have been stopped by West Garo Hills police of Meghalaya at Paikan-Krishnai area along Assam-Meghalaya border on the way to Bangladesh.

Question has been raised why the dumpers from Bhutan, which is one of India’s favourite neibouring nations,  have been targeted by Meghalaya police despite having necessary documents for transporting goods.

According to information, the drivers and handymen of the dumpers have faced a difficult situation as their loaded vehicles remain stranded in the Paikan-Krishnai area after West Garo Hills police prevented their entry to Meghalaya through which they reach Bangladesh to deliver stones.

Sources said, “A large number of dumpers have been carrying stones from Bhutan and supplying the same to Bangladesh through Assam and Meghalaya since long. But Meghalaya police have suddenly stopped allowing the trucks to enter Meghalaya following which more than a hundred trucks have remained stranded in Paikan-Krishnai area.”

The drivers also informed that they have necessary documents and the required permits to transport the goods. But despite that they have failed to understand why the Meghalaya police prevented them from entering the state.

The drivers further added failing to enter Meghalaya, they parked their vehicles on the road along the Meghalaya border, but from there also, they were chased.

“Currently, more than one hundred dumpers along with drivers and handymen have been remaining stranded at Paikan in Krishnai area in Goalpara district for the last four-five days,” said sources.

Sources added that due to lack of money, some of the drivers and handymen even have passed moments in hunger.

The vehicles have also faced crisis of fuel, sources added.

The drivers and handymen of the dumpers have sought intervention of authorities concerned so that their trouble comes to an end.