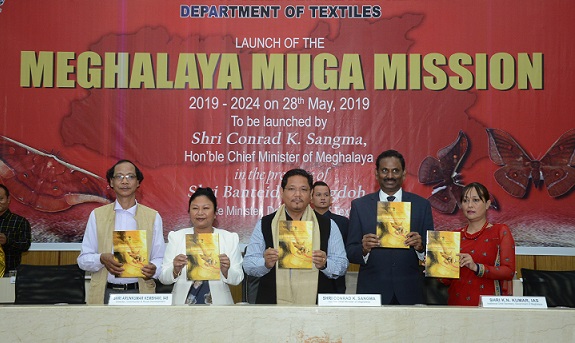 The Meghalaya government is on a mission launching spree with chief minister Conrad K. Sangma continuing launch of missions one after another.

The Meghalaya Muga Mission was launched at a function held at the State Convention Centre in Shillong.

Launching the mission, the chief minister said the northeastern region has a history and rich culture attached to ‘muga silk’ and the identity of the region as a silk producing province goes back centuries.

The Meghalaya Muga Mission Document was also released by the chief minister at the function.

With the launch of the Muga Mission, Sangma hoped that the production of muga silk in the state would receive the much needed leverage and direction with a funding of close to Rs 130 crore from multiple sources over a period of five years.

“Until now, our farmers produce the raw silk, which is mostly sold to our neighbouring state of Assam. Increasing the production and ensuring value addition to the available resources in the form of finished products will greatly improve the economic status of muga farmers and also fuel growth in the state’s GDP,” he said.

Market tie-up with industry partners, fashion houses and designers would give a major fillip to muga farmers with the increase in demand of muga silk from Meghalaya, he said.

“All the mission mode programmes such as the Jackfruit Mission, Milk Mission and other initiatives have allowed us to focus on specific targets to be achieved in a time-bound manner. Most of these initiatives have already started to bear great results,” the chief minister said.

The CM informed that the government would soon roll out ‘MeghaMart’, an online platform to facilitate sale and purchase of products sourced from local entrepreneurs.

The government has already prepared a database comprising 2000 enterprises and more than 10,000 products that will be available through the website. It will be the ‘Amazonfor Made in Meghalaya products’, he said.

Stating that the government will soon come out with the procurement policy making it mandatory for government departments to source certain amount of their supplies from local entrepreneurs, the CM said that the online platform would provide easy access to locally produced goods for buyers.

Additional chief secretary K.N. Kumar said that of the 108 metric tons of muga silk produced in the country, Meghalaya with annual production of 30 metric tons accounted for a fifth of the total national production.

Kumar informed that the government has charted out a roadmap for implementation of the mission.

An investment of around Rs 130 crore will be made in the next five years for area expansion, development of critical infrastructure, building of human capital and significant inputs for developing final finished products including its sale and marketing.

He said that the target output in the next four to five years would be 43 metric tons a significant increase of 13 metric tons with monetary production value of the raw resources valued at around Rs 50 crore to Rs 70 crore.

He added that the value addition to the raw silk would increase the production value between around Rs 200 crore and Rs 300 crore.

Kumar also informed that a Muga Farmers’ Training Centre would be set up at Resubelpara in North Garo Hills to facilitate scientific training and equip the farmers with the necessary skill sets.