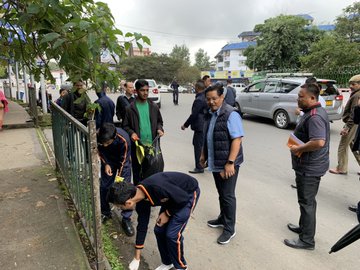 In a move to turn waste into wealth, the Meghalava government has encouraged people to collect plastic waste and the same will be sold to a cement plant which will consume plastic as fuel instead of coal.

Speaking at a gathering in the main secretariat premises after paying tribute to the Father of the Nation, Mahatma Gandhi on his 150th birth anniversary, chief minister Conrad K Sangma said that all villagers have been encouraged to collect plastic waste and the government has also banned the use of single-use plastics and plastic water bottles.

He informed that 17 tons of waste plastic collected by rag pickers and village level volunteers across Meghalaya will be consumed by Dalmia cements as fuel for producing clinkers.

The cement company will pay Rs 30 per kg directly to the scrap dealer engaged by the Swachh Bharat Mission office for collection and transportation of waste plastic.

The cement factory has been retrofitted to consume plastics in place of coal.

The Meghalay state pollution control board will monitor the ambience air quality after burning the plastic waste so that no harmful emission takes place.