State funeral of Donkupar Roy to be held at Sohra on Wednesday at 12.30 pm 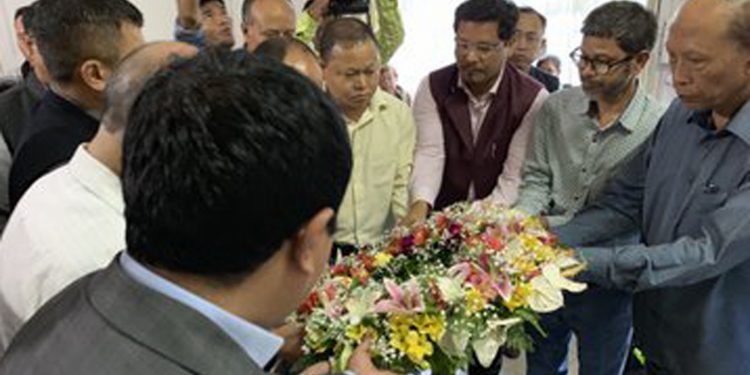 The mortal remains of Meghalaya Assembly speaker Dr Donkupar Roy arrived in Shillong, the state capital of Meghalaya on Monday.

Rich tributes were paid to the late leader as his body arrived in the city,

Leaders of United Democratic Party (UDP) and Hill State People’s Democratic Party (HSPDP) on Monday vowed to pursue the wish of the late leader Donkupar Roy Dkhar to bring unity among all regional parties in the state.

After the condolence meeting of the two parties at MLA hostel here, HSPDP legislator, Renikton Lyngdoh Tongkhar, said that the initiative of bringing together other regional parties, taken by both the UDP and HSPDP under Dr Donkupar Roy‘s leadership would continue.

“We have made a beginning under Dr Donkupar as UDP president, where the two parties (UDP and HSPDP) had fought together the 2018 Assembly polls. This effort will continue,” Tongkhar said.

A condolence meeting of the MDA government was also held at the state secretariat chaired by chief minister, Conrad K. Sangma.

The MDA recalled the contributions of the speaker and termed his demise great loss to the state.

UDP leader, Bindo M. Lanong said that the spirit of regionalism should go on as has been initiated under the leadership of the late speaker, and the MDA government should also grow with more strength.

The Meghalaya Assembly speaker passed away at Medanta hospital, New Delhi on Sunday.

The body reached Guwahati airport on Monday at around 8 am, after which the casket was taken in an army truck to Shillong by road.

Representatives of the MDA Government paid respect to departed leader Dr. Donkupar Roy at his residence in #Shillong. pic.twitter.com/Gk5lDrFt2I

As soon as the body reached the Speaker’s official residence at Crinoline View Bungalow here at around 12.30 pm, people thronged to receive the casket and paid floral tributes and respect to the veteran political leader of the state.

On the demise of the speaker and the void in the political spectrum of Meghalaya, the governor said, “Dr Donkupar was an outstanding politician. He had been in three different capacities as Speaker, earlier on as chief minister and president of his party.

“All these combined in one man that made him an outstanding and an unusual politician,” he said.

“I am quite sure all voids eventually get filled but in some ways the void will remain.  Not just his family, but the people of Meghalaya have lost a very able leader,” the governor said.

The chief minister said that the late Speaker believed in true values of leadership, trust factor, and other qualities that have surely made him a true leader.

“I used to see a lot of my father’s qualities in him and he was a father figure to me. It was a great loss for the state and for me personally,” said the CM.

Leader of opposition, Dr Mukul Sangma also recalled his association with the Speaker especially when he worked together with the UDP during the Congress-led government from 2010 to 2013.

“It is extremely a sad moment because when we talk about the ramifications after the demise of a leader of his stature,” said Mukul Sangma.

“He was a leader who has been able to keep his party leaders clued, and who has been instrumental in various aspects of governance over the years,” he added.

A condolence meeting of the Congress Legislature Party which was attended by Congress legislators was also held at the Leader of Opposition bungalow.

Dr Mukul Sangma said that Dr Donkupar Roy has a “unique and exclusive quality” as he can be a trusted and dependable political.

According to Dr Mukul Sangma, the expectation that the Congress would form the government together with the UDP after the results of the 2018 Assembly elections did not happen because, Dr Donkupar Roy as party president was a man of words and who maintained his principle.

Dr Donkupar Roy was elected as MLA of Shella constituency for the seventh consecutive term since 1988.

He was one among few politicians who had not tasted defeat. He took over as UDP president since 2003.

On Tuesday, a prayer service will held at the Crinoline View Bungalow at 1 pm, and thereafter, the mortal remains of the Speaker will be taken to Sohra at 2 pm.

The state funeral will be held at Sohra on Wednesday at 12.30 pm, and at 3 pm, the body will be taken to Shella village for the last rites.