Assam police alleged that stones were pelted, following which, they resorted to lathi-charge 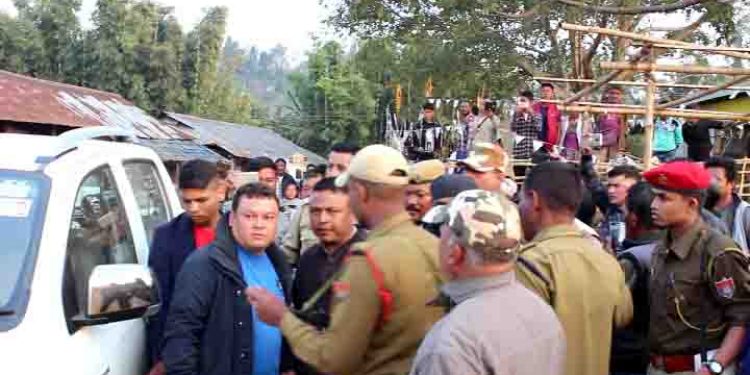 A complaint was lodged with the Meghalaya Human Rights Commission by Congress legislator from Rambrai-Jyrngam constituency, Kimfa Marbañiang and Hynñiewtrep Youth Council (HYC) on Friday alleging violation of human rights by Assam police.

Assam police went to Umwali village on Thursday to stop workers of the M/S Dhar Construction from erecting electric poles to provide electricity to the village and also allegedly assaulted villagers including women for objecting arrest of two persons – the secretary of Umwali village and a driver of Meghalaya Energy Corporation Limited.

The people were also helping the workers to speed up the construction because the area is preparing to host a Church gathering next month.

Assam police alleged that stones were pelted, following which, they resorted to lathi-charge.

Several villagers were seriously injured in the lathi-charge and 16 of them were referred to Nongstoiñ Civil Hospital for better treatment.

Meghalaya chief minister Conrad K. Sangma said deputy commissioner and superintendent of police of West Khasi Hills district have spoken to their counterparts in Assam, and talked to them to release the two arrested persons.

HYC president Robertjune Kharjahrin told reporters that the complaint was lodged with a plea before the Commission to look into the matter and pass appropriate orders.

Kharjahrin said that in the complaint, the council urged the Commission to also see that compensation be awarded to the villagers who were injured in the assault, direct the Assam police to release the arrested persons without conditions, book the Assam police under appropriate provisions of law for blatant violation of human rights of the villagers of Umwali village, direct the Meghalaya government to provide immediate protection to the villagers, and pass orders as deemed appropriate by the Commission.

The Rambrai-Jyrngam MLA also lodged the complaint with the Commission against Assam police for assaulting the villagers which left many men and women seriously injured.

“The Assam police have violated human rights by hitting the villagers including women, and there was no women police at the place of occurrence,” he said.

He submitted the complaint to home minister, James K. Sangma and other authorities including the Meghalaya State Commission for Women.

Marbañiang said that after knowing about the incident on Thursday, he visited the area but when he went to meet Assam police to talk to them, he was confronted by residents of the area belonging to the Nepalee community, and they disrupted his discussion with the Assam police.

“I had a heated argument with them (Nepalee residents) because they were interrupting my discussion with the Assam police,” Marbañiang said.

The residents shouted at the MLA saying, “This is Assam…we are Gorkhas.”

Meanwhile, the sub-divisional magistrate of Mawshynrut Civil Sub-Division, West Khasi Hills district, has promulgated Section 144 CrPC in Langpih and adjoining areas bordering Assam prohibiting carrying of illegal arms and other lethal weapons by any individual or groups and unlawful assembly of more than five persons to prevent any unwanted happenings.

The order came into force with immediate effect and will remain until further orders.