Chief Advisor to CM Thomas A. Sangma received the India Today – 'The State of the States' award from Vice President Naidu 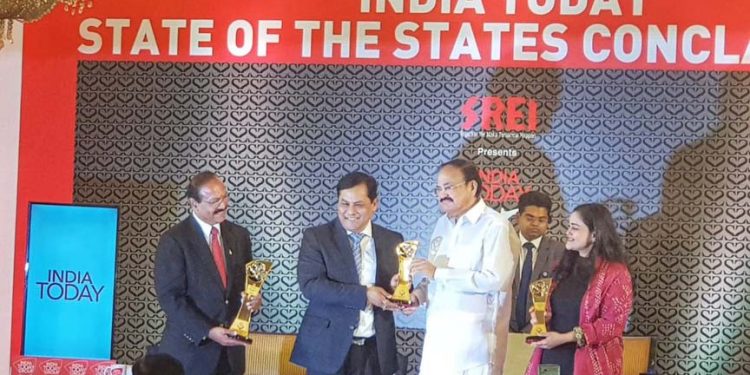 The Chief Advisor to the Chief Minister Thomas A. Sangma on Thursday receiving the India Today – 'The State of the States' award on behalf of the State Government at Taj Mahal Hotel in New Delhi.

The Chief Advisor to the Chief Minister Thomas A. Sangma on Thursday received the India Today – ‘The State of the States’ award on behalf of the State Government at Taj Mahal Hotel in New Delhi.

Vice President of India M Venkaiah Naidu conferred the award to Meghalaya in presence of Union Ministers, Chief Ministers and Ministers from different parts of the country.

Meghalaya has been adjudged the ‘most improved small State’ in the category of agriculture.

The annual India Today ‘The State of the States’ study is an attempt to find out which Indian State offers its citizens the best opportunities, both at work and outside. Further, the study tracks each State’s performance over time and, in particular, records the changes over the last five years. It takes into account both the business environment and the quality of life.

Thomas A. Sangma who accepted the award on behalf of the State and the Chief Minister Conrad K. Sangma said, “It is an honour for the people of Meghalaya who are dependent on agriculture and the Department of Agriculture that has been working tirelessly to ensure that the agriculture scenario improves in Meghalaya.”

Conrad K. Sangma thanked India Today for their effort to undertake such studies, which would allow the government to further strategise initiative to better the agriculture infrastructure and allied sector for the overall economic growth of the State.

“We have laid adequate thrust on improving agriculture in Meghalaya and such award will further motivate our officials and the farmers to take a quantum leap to ensure innovative and sustainable farming practices,” he said.