CM Sangma met Union External Affairs Minister Sushma Swaraj seeking her intervention on road connectivity between Bangladesh and Meghalaya and mentioned of the Shillong – Dhaka and Tura – Dhaka routes. Swaraj has assured to consider the request.

She said that the issue would be taken up in North East Chief Minister’s Meet to be held in New Delhi on May 4.

She also assured that all central assistance would be extended to Meghalaya and other North Eastern states to improve relations with neigbouring nations to enhance trade and cultural ties.

The Union Minister suggested the Chief Minister to take advantage of the good relationship with Bangladesh and said that all focus and thrust is being accorded to North East under the Act East Policy.

The Chief Minister said Meghalaya share over 440 km border with Bangladesh, which is being considered to devise a new strategy on “Act South” to ensure trade and commerce thrives in the region.

The Chief Minister proposed for issue of work permit to Bangladeshi nationals to address the challenge of infiltration, to which the Union Minister said that it would be discussed and examined. 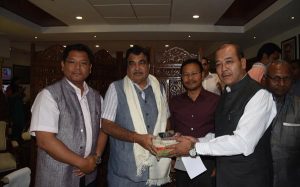 Nitin Gadkari assured that all roads in the State would be improved and enhanced with priority  based on the scope of economic growth and to reduce the travel time connecting the district headquarters and State capital.

The Union Minister also sought the report on the realignment of the existing roads to reduce distance and facilitate better connectivity. Gadkari has assured all cooperation to strengthen State PWD for better execution of works. 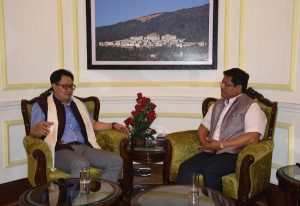 CM Sangma along with his State Power Minister James K. Sangma also called on Minister of State Independent Charge Power R K Singh to discuss on the power scenario. The Union Minister has set the agenda that all villages in Meghalaya should be electrified.

Singh has assured all cooperation to strengthen electricity system in Meghalaya.

Singh has asked Meghalaya to take advantage of Atal Jyoti Yojana to put up 2000 solar streetlights in each constituencies of the State, also to tap potential of solar energy by putting up roof top solar panels in Government establishments and institutions.

Singh said that by April 1, 2019, Indian government wants to achieve the target of 24×7 power supply across India, and Meghalaya has to play a pivotal role in North East to enhance power connectivity. 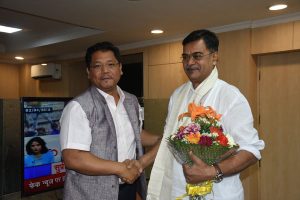 On the request for hybrid renewable energy source including solar, hydro and wind by the Chief Minister, Singh said that provision are there and the Ministry will expedite the process on submission of proposals from the State.