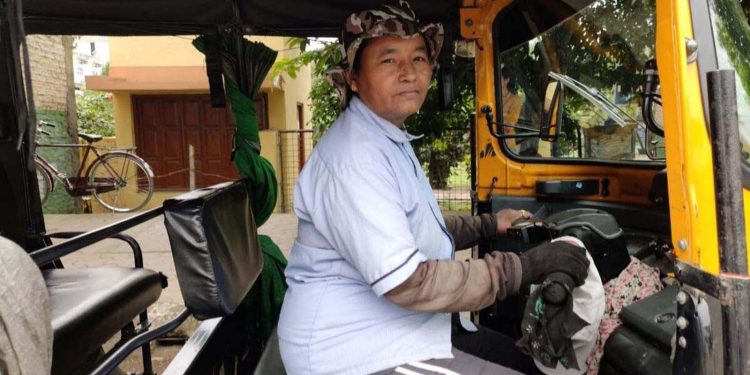 Laibi Oinam, the first woman autorickshaw driver of Manipur, was taunted by people for choosing the job in 2011.

But she is now an inspiration for many and earns respect wherever she goes.

Oinam had to start the job as she had no other option to run her family of four, including two sons.

A report by The Better India quoted Oinam as saying, “People once laughed at me, taunted and called me names. I felt humiliated. But I had little choice.”

If you come across Pngei Bazaar auto stand in Manipur, you may spot her there next to her autorickshaw.

She had started her journey of an auto driver’s life when she was 41.

Why had Laibi Oinam chosen to drive an autorickshaw?

She was working as a labourer in a brick kiln.

But when her husband was diagnosed with severe diabetes and was advised bed rest, Laibi became the only bread earner for her family.

Her family’s financial crisis sometimes became so worse that she even had to skip her meal to feed her sons.

One of her sons also had to drop out of school due to crisis.

She had chosen to drive an autorickshaw on her own. Laibi collected money from chit fund and bought a second-hand auto.

Her vision was clear – she must educate her children.

But the things did not go in a smooth way as she her job was not welcomed by the people.

She also had to face abusive words.

The economic blockade in 2011-12 complicated the situation in Manipur and it also affected Laibi’s family.

A report said the traffic police also did not hesitate to penalize her for unnecessary reasons.

The report quoted Laibi as saying, “At one time, when I skipped a signal to get some passengers, they thrashed my auto and in turn hit me as well.”

But Laibi’s encounter with filmmaker Meena Longjam in 2012 brought her under the spotlight.

After meeting Laibi, whom she calls ‘eche’ (sister), Meena decided to make a documentary on Laibi’s life.

She took three years to come up with the documentary ‘Auto Driver’ of 30 minutes which won a National Award in the non-feature category in 2015.

This was the turning point for Laibi’s life.

Things started to change as the documentary made headlines across the country.

People started to recognize her and respecting her and her earning shot up.

Laibi’s dreams don’t end here. She dreams that one of her sons become an IAS officer and the other a successful footballer.

As per reports, her elder son is now pursuing his graduation and aspires to be an IAS officer while her other son recently joined a reputed football academy at Chandigarh.