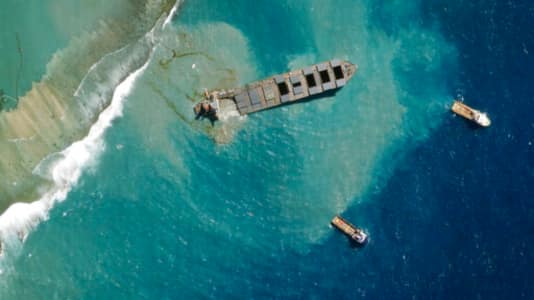 Mauritian authorities on Tuesday arrested the captain of a Japanese ship that ran aground on a coral reef and spilled 1,000 tons of oil on the pristine waters of the scenic island of the Indian Ocean.

As per reports, the Indian captain of the ship MV Wakashio and his deputy, who is a Sri Lankan, were charged under the piracy and maritime violence act. They will have to reappear in court in Mauritius on August 25.

Officials are investigating as to why the ship, carrying 4000 tons of fuel, was making its way from Singapore to Brazil and had come so close to the island.

The damaged ship spilled more than 1,000 tons of fuel into the turquoise waters of the Mahebourg Lagoon, one of the island’s most pristine coastal areas.

However, salvage crews managed to pump some 3,000 tonnes of fuel off the bulk carrier before it split into two on Sunday, preventing a much larger environmental catastrophe.

On Tuesday, they began towing the larger of the two pieces of the Wakashio out into the open ocean where it is to be sunk.

The Mauritius government has closed off the coastal area of the eastern part of the island, where thousands of civilian volunteers worked for days to try to minimize damage to the Mahebourg Lagoon and protected marine wetlands polluted by the spilled fuel.

Only officials and hired workers are permitted to work in the coastal area and the waters surrounding the grounded ship.

Experts from France, Japan, and the United Nations are also involved in the clean-up work.

The island nation, which is a popular tourism destination, has taken a severe hit due to travel restrictions during the coronavirus pandemic.