Following Assam Forest Minister Pramila Rani Brahma’s allegation of some forest officials’ link with poachers, the Northern Range forest officials of the Sixth Addition of the Kaziranga National Park (KNP) in a joint operation against poachers recovered one plastic boat, a pump and some materials which are used in poaching on Saturday evening.

“The operation was carried out on the basis of a confession by two poachers – Nur Haque and Sur  Haque – who were arrested on Friday,” forest range officer Baruah said. 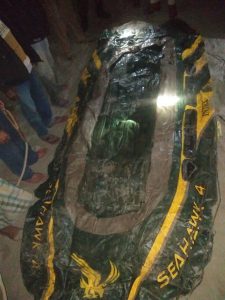 “All the materials were kept hidden in the ground,” Baruah added.

The poachers also confessed that they used the material for crossing river Brahmaputra to enter Kaziranga National Park for the purpose of poaching.

It may be mentioned that Forest Minister Brahma doubted involvement of forest officials’ involvement in rhino poaching in the State and held the forest range officer concerned responsible for the poaching incident at Polokata Tapu in Biswanath recently.

A rhino was killed by poachers at Polokata Tapu in the Sixth Addition of the Kaziranga National Park in Biswanath district on February 10 midnight. 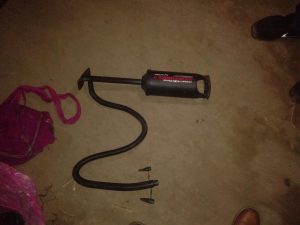 Brahma, who reached the spot next evening where poachers killed a male rhino and took away its horn, had said incidents of rhino poaching can’t happen without involvement of some forest officials.

She instructed the Divisional Forest Officer of Kaziranga National Park (KNP) to take action against the range officer of the Northern Range of the KNP.

While talking to the media after visiting the Sixth Addition of the KNP and Polokata Tapu, which is a totally deserted area, about 200 metre from Lahorijan forest camp, said, “Our government had assured the public before coming to power that we would give full protection to the wild animals, but now we are failing to fulfil it due to some forest officials.”