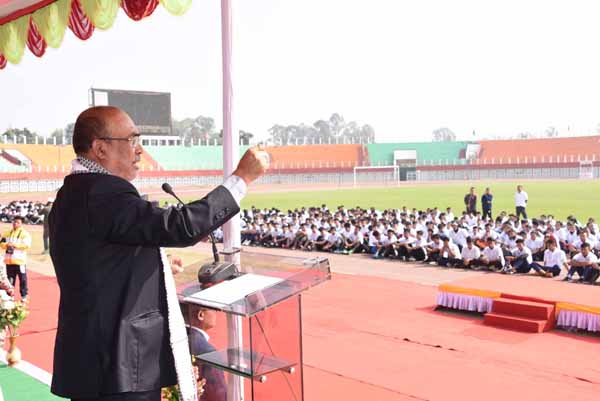 Flagging off a run, the annual Shannaroishinggi Numit (Players’ Day) was observed in Manipur on Sunday.

Speaking on the occasion CM Biren Singh promised that the annual budget of YAS will be increased to Rs 100 crore in the 2019-20 fiscal for further development of sports in the State.

Encouraging the players to put in more effort to bring laurels for the State and the country, he also announced a hike in the cash incentives for the National level competitions from Rs 3 lakh to Rs 6 lakh. He further said that daily allowance of the players who take part in the National level competitions would be increased from Rs 200 to Rs. 500. The State Cabinet would take a decision in this regard at the earliest, he added.

Stating that the Government is ready to provide jobs to all the State players who are currently outside the State, the Chief Minister urged them to return to Manipur.

Informing that the Government has also begun awarding a cash prize of Rs 20 lakh to Gold medal winners at International tournaments, the Chief Minister said that Mirabai Chanu had been recently awarded the said amount recently.

N Biren Singh said that flood lighting facility would soon be installed at Khuman Lampak Main Stadium and astro-turf would be laid at four football grounds of the State soon. He also urged the public to celebrate festivals like Yaoshang in a way to avoid causing disturbance to others and by preserving the traditional and cultural values.

The Shannaroishinggi Numit was observed for the first time in February 25, 2000 marking the historic achievement of Manipur in the 5th National Games held from February 14-15 in 1999 in Imphal where Manipur team bagged the coveted Raja Bhalendra Singh Trophy.