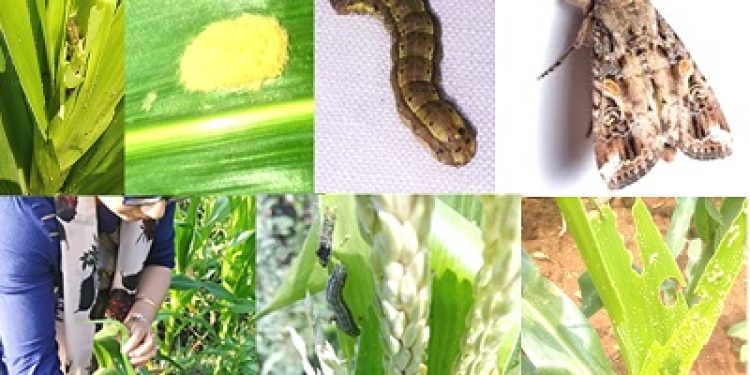 A team of scientists from Indian Council of Agricultural Research (ICAR) Manipur Centre detected a new invasive insect of American origin for the first time in Manipur.

The insect called Fall Armyworm (Spodoptera frugiperda) was detected by scientists Arati Ningombam, Romila Akoijam, Aruna Beemrote, M A Ansari and I M Singh of ICAR Manipur centre in their maize research farm at Lamphel and Langol in the outskirts of Imphal city and also at Chandonpokpi village farm in Chandel district in April this year.

Scientist (Entomology) Arati Ningombam said that they started monitoring the new insect since April and confirmed its existence in the State in the current week.

In India, it was detected for the first time in Karnataka in 2018 and rapidly spread to other parts of the country including Chattisgarh in January this year.

Earlier this insect was confined to America until 2015 and by 2017 spread to some African countries, wreaking havoc in the continent. It was also reported from Northeast states- Nagaland, Mizoram, Tripura this month, the sources said.

On the rapid spread in the region, Dr Arati said that it is because of the strong capable of flying by female insect who can fly more than 100 km a night besides being an exotic species, they’ve no natural enemies in the new environment which is similar to their native tropical and sub-tropical in America.

It is a polyphagous insect that can feed on many host plants, she added. It can cause complete devastation of a field within short time if appropriate control measures are not taken. It has been reported to feed on rice, sorghum, sugarcane and many economically important vegetables.

Another ICAR scientist (Agronomy), Dr M A Ansari, when contacted, told this reporter that any invasion by a new exotic insect is always a threat to the farmers and biodiversity of a place.

This new invasion should be considered seriously and knowledge about this new insect is the only way to manage the insect pest rather that blindly using insecticides recommended by pesticide dealers to control it, he felt.

The detection of the new insect is likely to give a major threat to the ongoing ICAR initiative on promoting improved technology of maize production in north-eastern states with objectives to generate technological options for farmers, to create awareness and participatory maize based technology demonstration on farmer’s field.

However ICAR scientists advises to remove weeds around the crop field,manual destruction of egg masses and caterpillars,set up pheromone traps at the rate of 4/ha for monitoring and 10/ha for mass trapping of adult insects etc.

Maize is the most important cereal crop in Manipur after rice.Present day use of maize especially  High Quality Protein Maize  as feed for cattle and poultry industry also offers huge scope for the growth of small and medium enterprises in animal husbandry thereby providing a win-win situation for both maize farmers and the cattle/poultry farmers.

Nagaland is the largest maize producer among NE states.