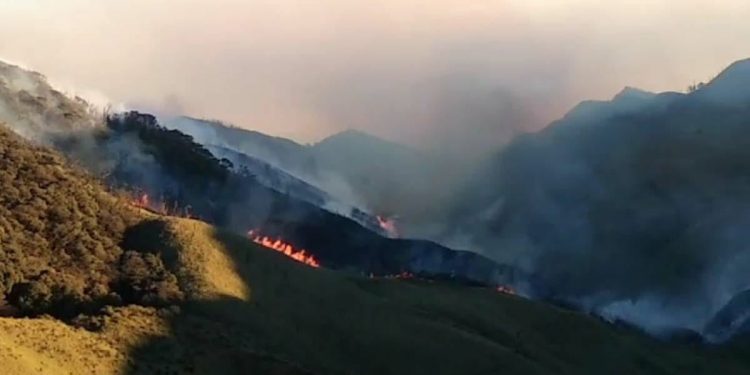 The Nagaland government on Thursday said that the wildfire in the Dzukou Valley on the Nagaland-Manipur border would be fully doused within the next 24 hours.

“The wildfire has been doused in most areas but gusty winds have taken the blaze to newer areas. We expect to fully control the blaze in the next 24 hours. The combined forces would study the exact ground situation on Friday and accordingly operations and the necessary steps would be taken,” Ruangmei said.

An Assistant Sub-Inspector of the NDRF deployed to tackle the fire was found dead in his tent on Tuesday in northern Manipur’s Senapati district bordering Nagaland.

Forest officials of Nagaland and Manipur said that they are yet to assess how much vegetation, flora and fauna have been destroyed due to the wildfire since December 29.

The wildfire has destroyed much of the forest, seasonal flowers, flora and fauna and affected the rich biodiversity of the valley, which is also a famous trekking site.

One of the 10 most beautiful places in the mountainous Northeast, the Dzukou valley, situated at an altitude of 2,452 metres above sea level, is a popular tourist spot and also famous for its seasonal flowers and biodiversity.