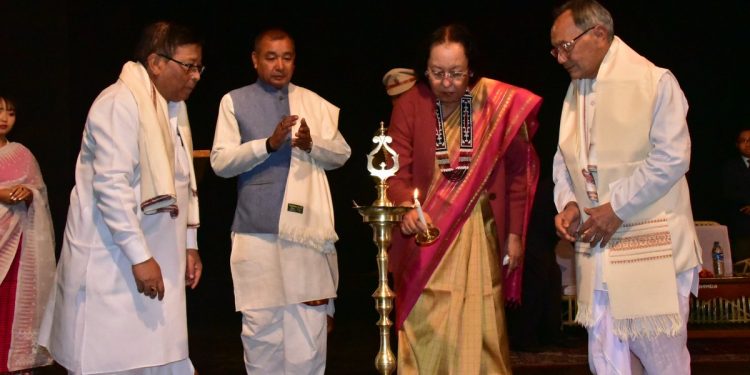 She said this can be achieved through performing arts acting as bridge between the government and the people.

The Governor said this while speaking as chief guest during the inaugural function of ‘Celebration of 100 Years of Manipuri Dance in Santiniketan and Festival of Dance Drama’ in Imphal.

The festival is being organized on the occasion of 44th foundation day of the production unit of Jawaharlal Nehru Manipur Dance Academy (JNMDA) at its auditorium.

Addressing the gathering, the Governor said the performing arts of the country have a great historical role to play in the emotional integration of India.

“The revival of performing arts and their massive propagation through mass media and cultural exchange on a large scale shall impart a cultural dimension to the forging of national integration,” she said.

“We have, of course, a mass awakening of the traditional art, especially after independence and this should be further intensified,” she added.

She further asserted Manipur is today popularly known to the world through her rich performing arts and culture and not through her geographical position and size.

The Governor also highlighted that Manipuri artistes have given innumerable shows in the country and abroad and have brought commendation and recognition.

The Governor also expressed gratefulness that the production unit of JNMDA has produced more than 40 dance-dramas since the establishment of Jawaharlal Nehru Manipur Dance Academy 66 years ago in 1954.

Vice chairman, JNMDA, professor H Tombi, who was the president of the inaugural function, intimated that according to official records, Manipuri dance was introduced in Santiniketan in 1920 after Rabindranath Tagore witnessed Manipuri dance in Tripura.

A dance drama titled ‘Bidai Abhishap’ directed and choreographed by N Amusana was showcased by artistes of the production unit, JNMDA as part of the day’s celebration.

On Friday, a dance drama titled ‘Prakriti’ directed by N Tiken and choreographed by S Basu will be performed by artistes of Progressive Artistes Laboratory, Lamboi-khongnangkhong.