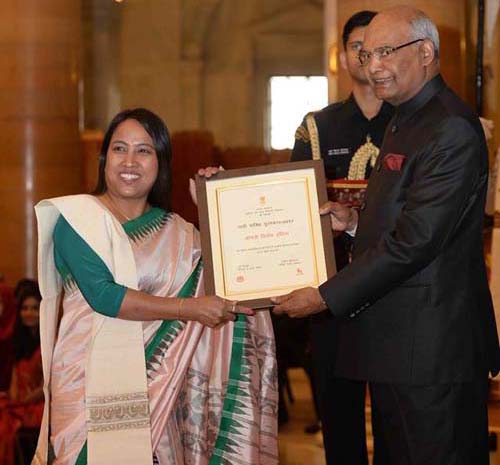 She was awarded on the occasion of International Women’s Day on March 8 for her contribution towards the women empowerment, development of socio-economic conditions of the weaker sections of the society and handloom sector.

Chirom Indira is a women entrepreneur, designer, exporter and social worker from Northeastern India. Her contribution towards the development of handloom sector and working for the women empowerment made her a known figure in the region.

She has earlier received many prestigious awards. In 2015 she became the first Indian recipient of the National Award in Design Development of Handloom Products, honoured by Ministry of Textiles. She was also honoured ‘‘DMA All India Women Entrepreneurs Award 2018 (Super Achiever Award)’’ by Delhi Management Association (DMA). She is a woman who has consistently strived hard to attain success and managed to keep her foot firmly on the ground.