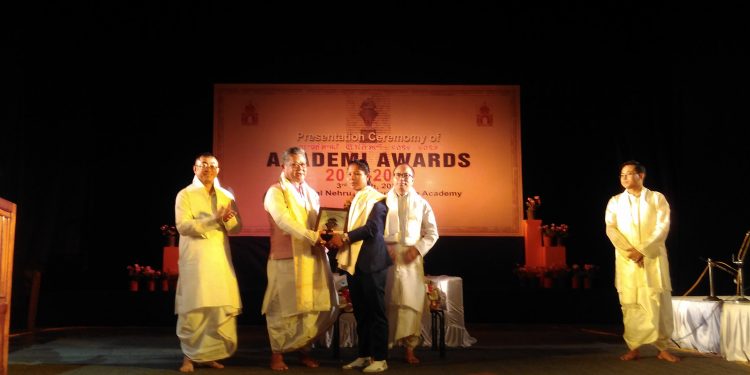 Twenty seven individuals were honoured with Manipur State Kala Akademi Awards 2016-17 for their exemplary works on various arts and culture activities in the state on Tuesday.

Minister Karam Shyam who holds Revenue portfolio and others also spoke at the end of the award distribution function.

The Akademi Award 2016-17 including 2 Akademi Fellows,19 Akademi Awards and 6 Young Talent Award were presented to 27 artistes.

Among them, 27-year-old Kaisii Athine, a resident of Maopungdong village in Manipur’s Senapati district was awarded akademi young talent award in tribal culture.

Thirty-two years Inaoton who is deaf-mute by birth, has risen above many adversaries to establish himself in the world of mime theatre.

He is a resident of Kongba Kshetri Leikai in Imphal East district.