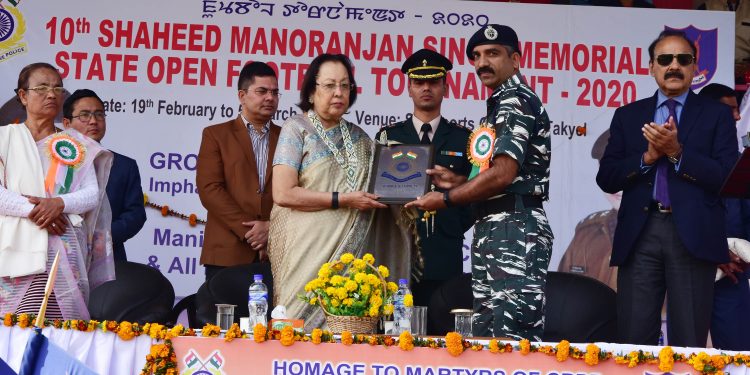 Nearly two dozen top football teams of Manipur from both valley and hill districts are participating in the tournament this year.

Speaking on the occasion, Governor Dr Heptulla said it is a moment of great happiness to be present during the inauguration function and a proud moment to be a part of the tournament which is named and played in memory of late Ng Manoranjan Singh, assistant commandant of CRPF.

She also said she offers her salute to the brave officer for his supreme sacrifice and respect to his mother Ng Memcha Devi who was also present on the dais.

The Governor said she was informed that CRPF has been organizing the tournament for the last 10 years in the memory of son of Manipur, Shaheed Manoranjan Singh who sacrificed his life for the nation.

The officer was awarded Police Medal for Gallantry (posthumously).

It is really a proud moment, she added.

The opening match was played between AFC, Thoubal and Classic FC Imphal.