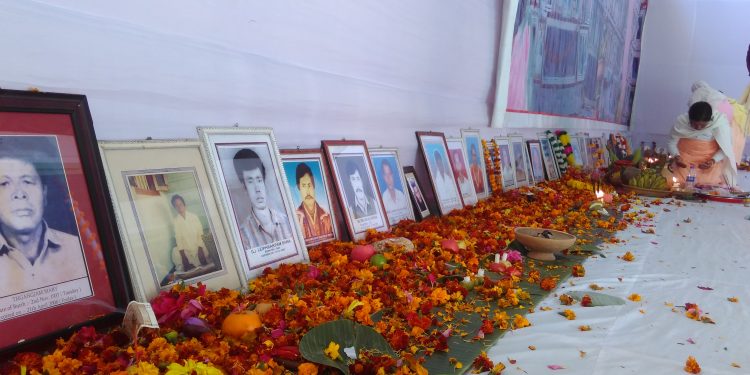 The 31st Drivers’ Day was widely observed in Manipur on Tuesday by paying floral tributes to the departed souls of drivers who sacrifice their live sin serving the public.

The dignitaries, invitees and relatives, family members paid floral tributes to the photos of the deceased drivers who sacrificed their lives for the public while encountering obstacles in their duties.

Drivers risking their lives have fulfilled their duties, even though they had to face dreadful consequences during the bandh or blockades in the region.

It has been reported 266 drivers in the State have died in various incidents since 1978 till date, according AMRTD & MWU.

“But there are many unreported cases,” a functionary of driver’s union said.

Drivers’ day observation was observed in Manipur after the historic drivers’ protest against the frequent harassment and discrimination at Koirengei old airfield in the outskirt of Imphal on January 14, 1990.

The day was observed under the aegis of All Manipur Drivers Welfare Association at Keithelmabi truck parking with MLAs Dr S Ranjan of Konthoujam constituency, H Dingo of Sekmai constituency and noted entrepreneur Thangjam Arun as dignitaries of the observation.

Drivers and conductors’ of Manipur state transport also observed the day at its premises at Moirangkhom in Imphal.

Many inter-district and inter-village passenger vehicles service association and others also observed the day by honouring the veteran drivers and relatives of the drivers who sacrifice their lives in serving the general public.