The Manipur Forest Department in collaboration with the villagers has taken up a new initiative to conserve the state bird Mrs Hume’s Pheasant, popularly known as Nongin in local tongue in Manipur’s Ukhrul district.

Principal Chief Conservator of Forests, Kereilhouvi Angami on Tuesday formally laid the foundation stone of the ‘Conservation Breeding Centre of the State Bird – Nongin’ at Shirui village, about 100 km north east of Imphal.

According to Divisional Forest Officer (Wildlife), Arun RS, the idea behind the move to establish a breeding centre in the forest area of the Shirui village with the support of the villagers is to conserve the state bird and its habitat considering the report of reduction in its global population.

The officer also informed that the state bird is one of the difficult to breed species because of its nature.

Necessary steps are on for the development of around four enclosures in the proposed conservation breeding centre and the Department is hopeful that the villagers can take the benefit out of conservation initiatives and the eco-tourism in view of the annual Shirui Lily festival, he added.

It may be mentioned that the state level Shirui festival will be held in Ukhrul district from April 24-28. 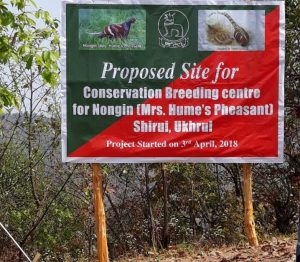 The breeding season of this greyish brown or purple head, with chestnut brown plumage state bird is between February to July and it is reported from many parts of Ukhrul district which borders with Nagaland’s Phek district and Myanmar’s Saigang division.

But surprisingly so far there is no official census of the state bird.

The birds are spotted mostly in Jessami areas and other villages including the deep forest areas of Shirui.

Mention  may be made that two gentlemen, GA Shimray and M Vaca of Shirui village which is one of the native areas of Nongin and it is listed under Schedule-I of Wildlife (Protection) Act, 1972, donated six hectares of land for this noble cause.

Even though Nongin is a state bird, the visibility of the bird is very rare in the valley as it confines itself to its habited sites in hills.

Currently there is only a pair of Nongin in the state zoological garden at Iroishemba near Imphal.

Mizoram to host first ever professional boxing event on March 6