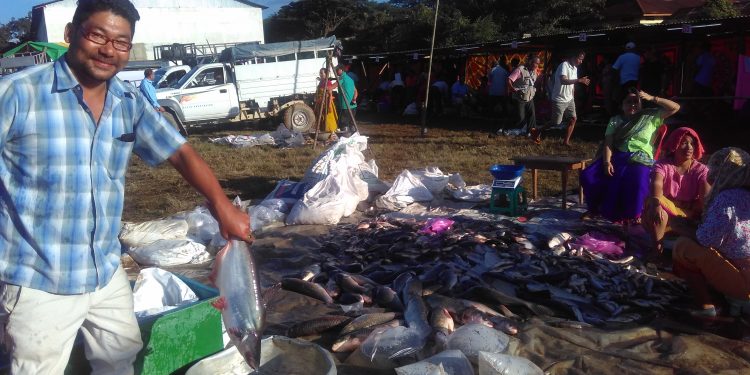 A day long fish fair-cum-fish crop competition 2019 was held in Manipur on Tuesday.

The fair was organized under the aegis of the Fisheries Department at DM College of Arts ground in Imphal.

The fair was held to encourage fish farmers and also to provide a platform to exhibit and sale State’s fish products.

Manipur fisheries minister N Kayisii and chairman T Robindro of the planning and development authority Manipur were the chief guest and guest of honour of the inaugural function of the fish fair.

Speaking on the occasion, fisheries minister Kayisii stated that fish production has increased year after year since the department gave its best efforts to meet the State’s requirement of 52,000 metric tonnes anually.

He also said that fishery activities have to be taken up both in the hills and valley to meet the requirements of the State.

Despite lack of adequate funds under state plan, the department is trying its best to explore ways and means to meet fund requirements of the department.

Many new initiatives have been planned and taken up by the department including project proposals for Retail Fish Outlets, Retail Fish Markets, Hatcheries, Cage Culture, Fish Feed Mills, Low Cost Housing and Insurance for fish farmers etc, he said.

Unlike previous years, certificates of participation will be distributed to every participating fish farmers this year.

The certificate holders will be accorded special preferences for schemes or grants by the department in the future, Kayisii added.

Meanwhile the festive mood filled the air in the state capital since the last few days.

For the Ningol Chakkouba festival, many people thronged to the market to buy items and goods for the festival.

However, the number of people was still comparatively less when compared to the past.

But it was seen that the shopping malls present in and around Imphal area were bursting with an insane amount of people.